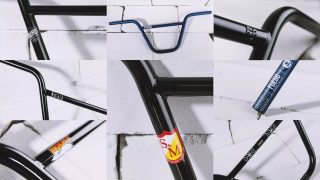 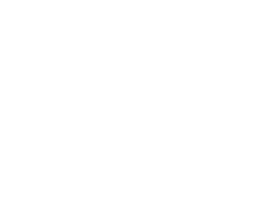 A selection of the Best BMX Handlebars available in 2018

BMX handlebars are fairly simple, but they come in a few varieties. From the amount of sweep up or back, to tube butting and thickness, plus the choice of two-piece or four-piece construction, there are definitely a few options available. Here are six of the best BMX handlebars from our recent tests.

We’ve tested the best BMX parts out there. Value for money, quality and brand credibility are the things we care about here at Ride UK.

“Value for money, quality and brand credibility are the things we care about here at Ride UK.”

Here are some extracts about each set of bars and why they made it onto our list of the best BMX handlebars this year. Check out the full review pieces for all the finer details on these six BMX handlebars for 2018.

For further reviews on everything BMX from complete bikes to tyres and tools, have a browse through the Ride UK 100, our in depth buyer’s guide to the 100 hottest BMX products on the market right now.

The Best BMX Handlebars 2018 by Brand

Cult is quite the revered brand. Started by Robbie Morales in 2010, it has been a huge success, with a strong company image, a diverse team of riders and some of the most trustworthy products on the market. 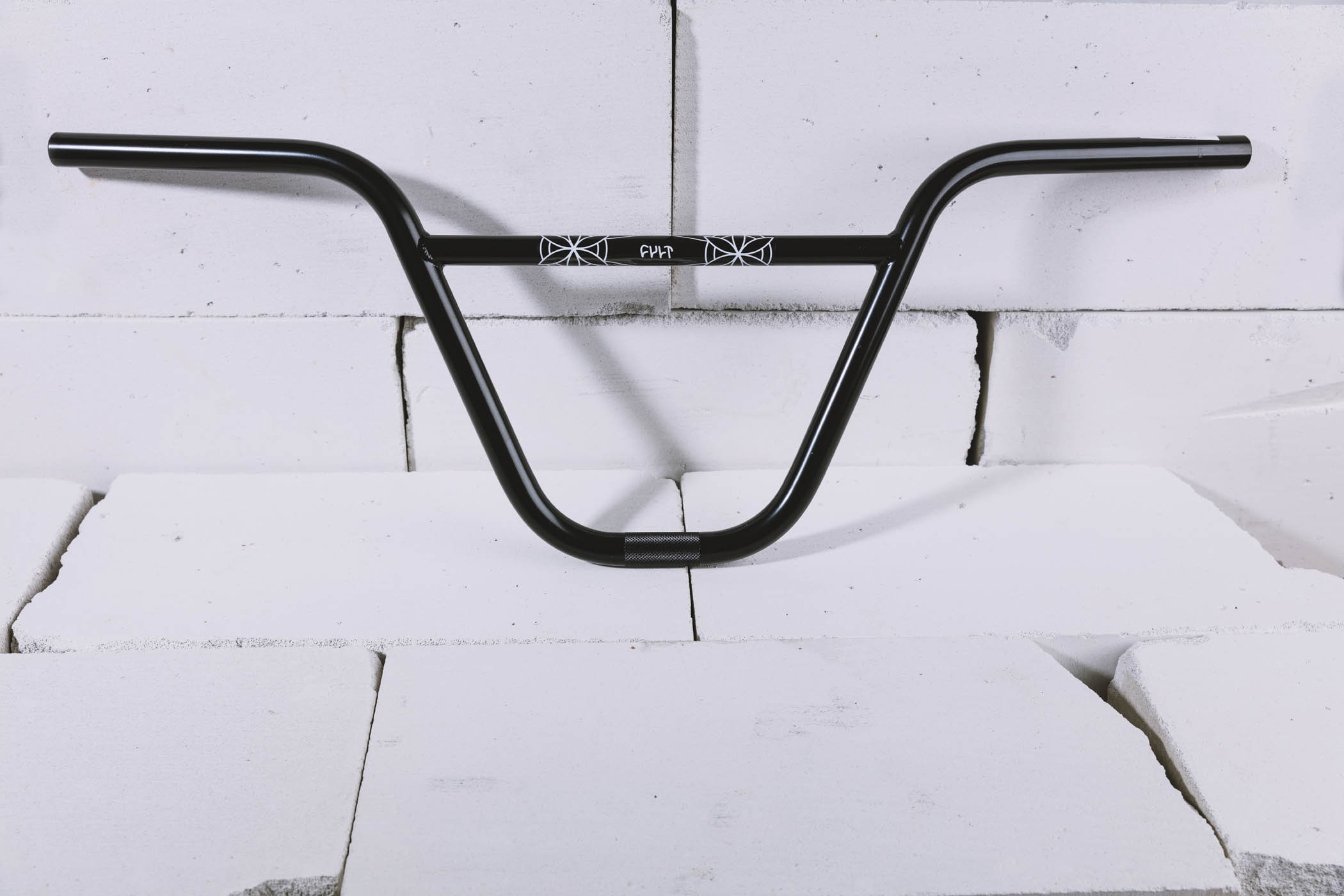 As you can see, the AK bars aren’t too wacky – just a simple, classic handlebar with a rather nice graphic containing the Cult logo. No crazy colours either, just black or chrome.

Geometry wise, these bars feel great. Twelve degrees of backsweep is around the most you’ll get on a set of bars these days, whereas the two degrees of upsweep is pretty standard. Combined with the generous width (30”), the result is a balanced feel, giving a natural position, no matter what size rise you choose. Cult offer no less than four sizes between nine and ten inches, so most riders should be covered.

The geometry also translates to a good looking set of handlebars. The shape is good, there’s a nice slow bend at the bottom and we think the crossbar is just right – not too high. 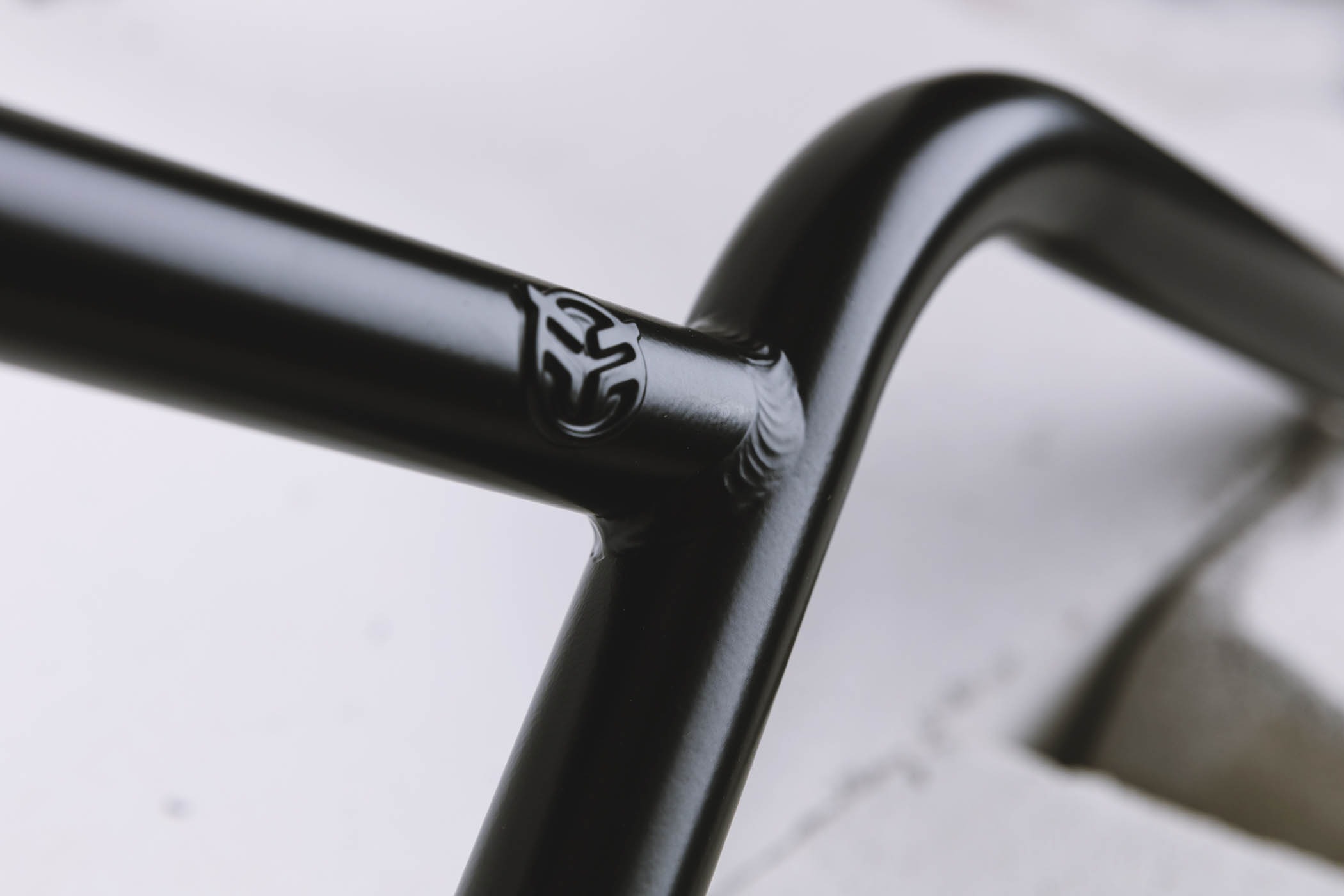 Federal Drop Bars have been around for a while. Why? Because they’re excellent bars, so they continue to be popular. They have the correct proportions, the right angles, a nice natural arm position, all the qualities you want from a handlebar.

That embossed logo will probably be the first thing you notice on these bars, it’s another fine example of branding by Federal – classy and understated.

Both the 4pc and 2pc V2 Drop Bars are available now. Something to suit all tastes.

The feel of these bars is clearly a bit different to the 2pc, thanks to updated sweeps, but they’re aimed a different kind of rider. Federal know their market, so the angles on these 4pc bars are different for a reason. They felt damn good to us.

Fiend forms the outlet of that kind of riding – the perfect blend of super technical skill and brutal gnarly massive big-balls riding. As Brian Tunney once said, the Fiend crew may very well ride a one-foot-high ledge but they’ll also truck off the roof next to it. Fiend’s success as a BMX brand has been carried purely by amazing bike riding – exactly as it should be. Zero gimmicks, pretty much no marketing, just a solid crew of riders who absolutely slay the world of BMX riding on a regular basis. 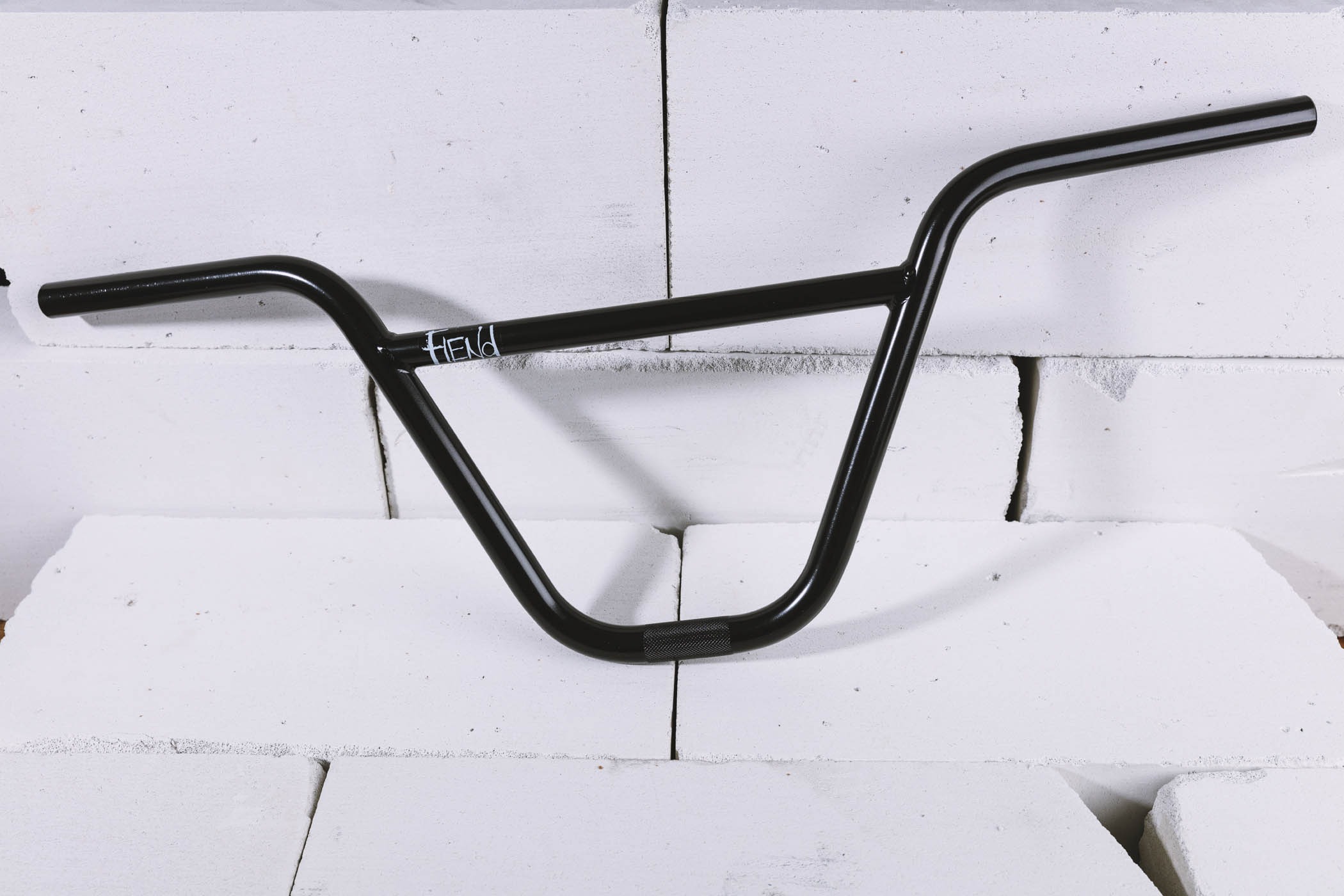 The manufacturing of the Fiend Team Bars is as you’d expect: full 4130 chromoly, heat treated and butted to save a bit of weight. They are solid, too. Designed with the Fiend team in mind, they have to be! Fiend say they can withstand anything that can be thrown at them – these are trustworthy handlebars…

They come in a range of sizes, so most riders should be suited. From 8.5” to 9” rises, all sizes share the 12º and 2º sweeps, but the higher bars have a little extra width. They’re balanced.

The Team Bars are a nicely made set of bars. Nice feel, simple looks, solid enough for Fiend’s team of savages. Done.

Flybikes began in 1999 in Vigo, Spain. A beautiful place! The guys have a crazy passion for BMX bikes and strive for perfection in how their products look and how their parts ride. There are some signature design aspects in Flybikes parts that let you know they’re part of the family as soon as you see them. From the little tree insignia to their clever and stylish design principles, Flybikes stuff is carefully dialled. The Flybikes team has always been strong, supporting some of the world’s most stylish and most progressive BMX riders, from icons like Ruben Alcantara and Sergio Layos to future legends Courage Adams and our man here, Devon Smillie. 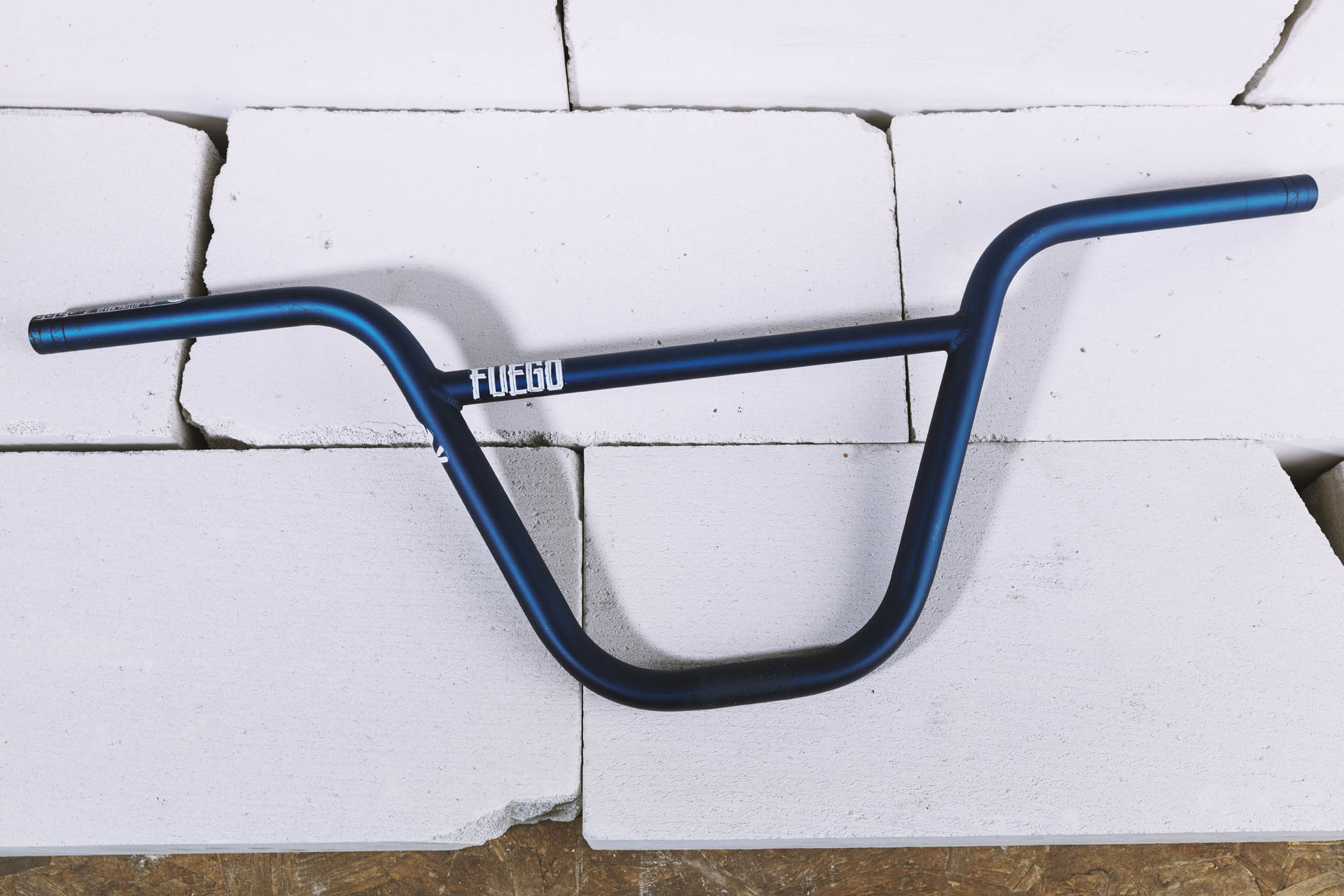 These bars are the perfect match to the Flybikes Fuego frame, of course. Especially colour-wise if you can get hold of this flat trans blue.

The Fuego is a solid bar. Butted tubing, heat treated, good geometry, all the things you’d expect. Devon has locked these down to his ideal angles of 3º upsweep and 10º backsweep, which is a bit more up and a little less back than many bars on the market. For those who prefer that kind of feel, these are a very good choice. In terms of rise, you can choose between 9” or 9.5”.

A nice feature of the Flybikes bars is that they come with incremental 0.5” cut lines to make it easier to customise the width. No measuring needed, no risk of wonky cuts, just lock the blade in and you’re sorted. Super useful! 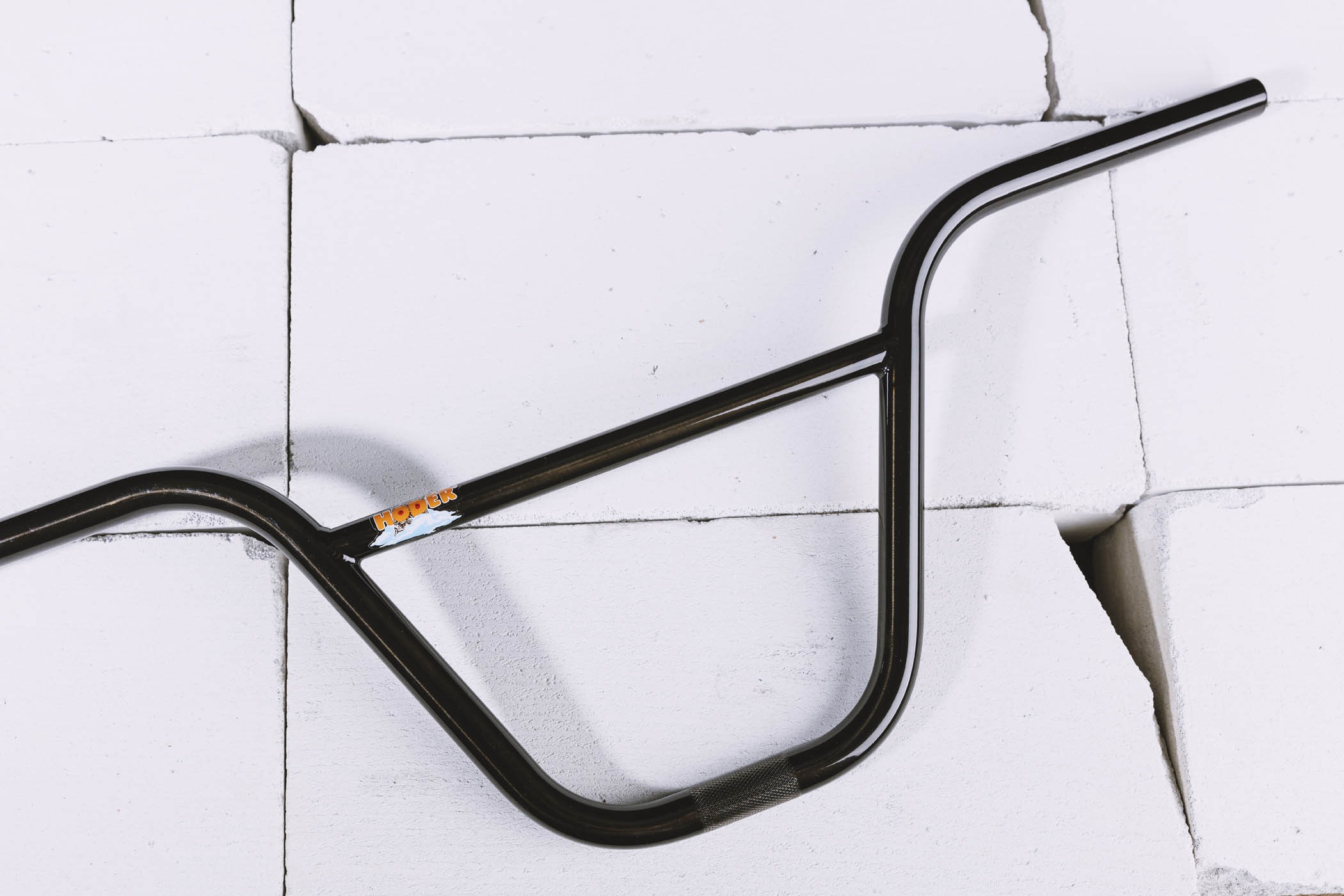 Mike Hoder is a big human. Big name, big personality, big riding. He needs big handlebars. S&M make a variety of Hoder bars, from the regular version to the taller ‘Hoder High’ bars to the even taller ‘Hoder Sky High’ bars that we have here. Consider this review to cover all sizes – they’re all the same high quality material and build quality.

Made in house at S&M HQ, the Hoder bars are a damn fine handlebar. Classic geometry on all sizes – 1.5º upsweep, 11º backsweep. We can verify that these angles feel superb. The Sky High bars we’ve featured here (recognisable with the Hoder ‘Hooters’ logo above the clouds) are 9.5” tall and a whopping 31” wide. Beasts!

If you prefer your bars a little lower, the Hoder Highs are 9” tall and the regular Hoder bars are 8.625” – they’re both an inch narrower than the Sky Highs too.

Stephen Murray, certified BMX legend, started the Stay Strong brand after his life-changing accident in 2007. The accident, at the Dew Tour in Baltimore, left Stephen paralysed from the neck down. In the last ten years, Stephen has done some amazing things with the Stay Strong brand. He really is an incredible human. You can read the full story in his autobiography, Staying Strong, that came out exactly ten years after the crash. To learn more about Stephen, see our 10 Weeks of Murray series that explores everything from his background and family life to his current lifestyle and the Stay Strong team. Knowing and working with Stephen is something we’re very proud of. 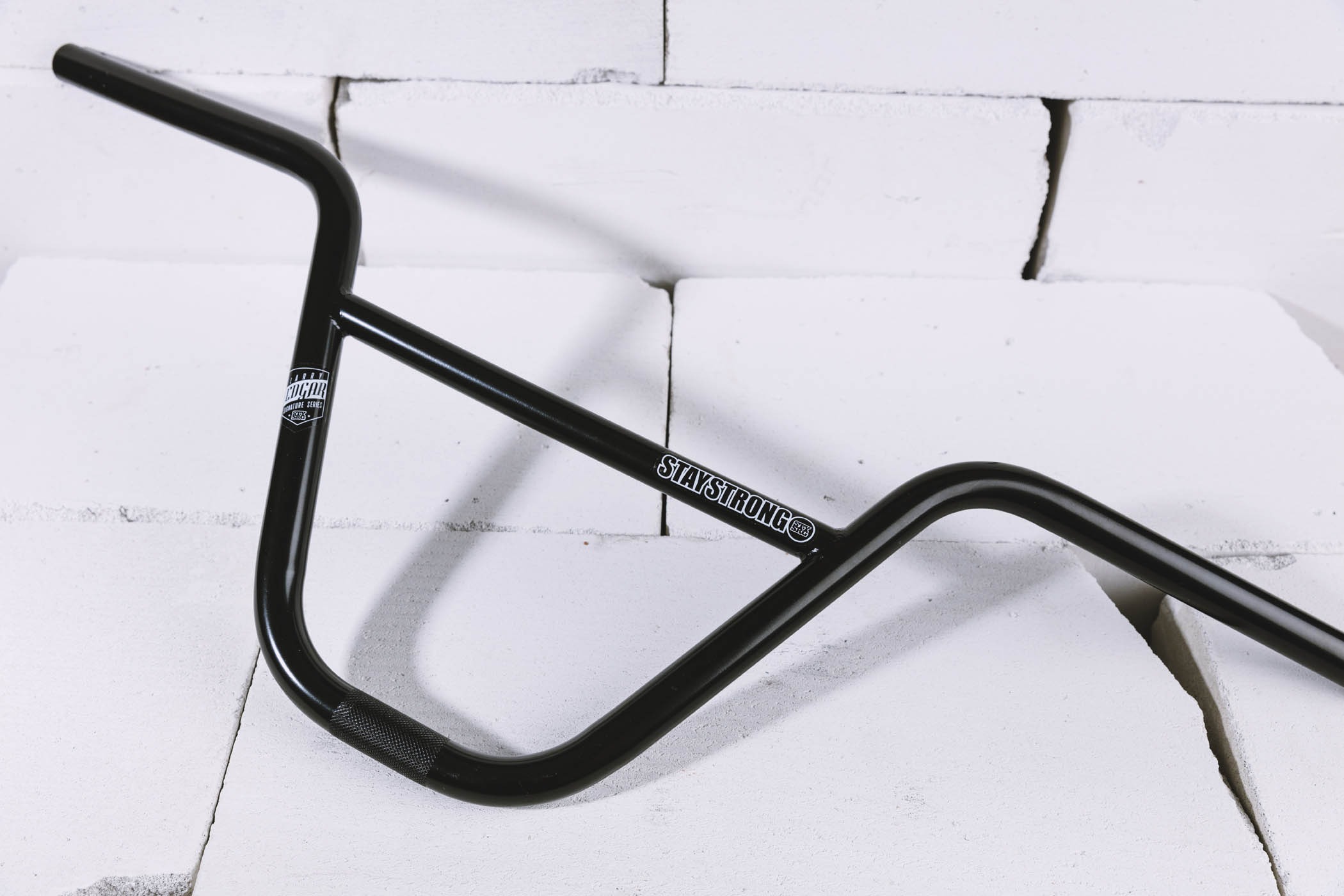 Larry Edgar is an absolute animal on a bike. The dude goes higher than anyone else, fact. He does 360 tables legitimately upside down… It has to be seen to be believed. We love Larry’s riding, it’s 100% wild, exciting to watch and always a crowd pleaser.

Proudly representing Stay Strong, Larry now has a signature set of handlebars that he uses for navigating the skies.

These bars are dialled. They’re 9” tall but don’t look like big bars – they’re nicely proportioned. 29” wide, black only, these are straight up no-nonsense bars. With a proven combo of 12º backsweep and 1º upsweep, these bars feel totally natural and balanced, especially with a set of ODI x Stay Strong grips…

That’s our round up of some of the best BMX handlebars in 2018! If you want to see more than this, from the finest parts available to the most useful accessories, check out the Ride UK 100. 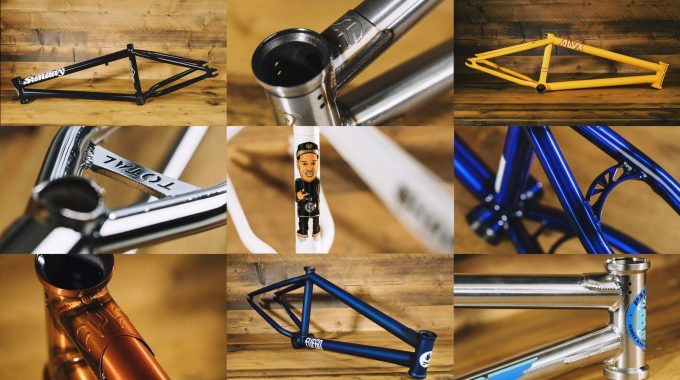 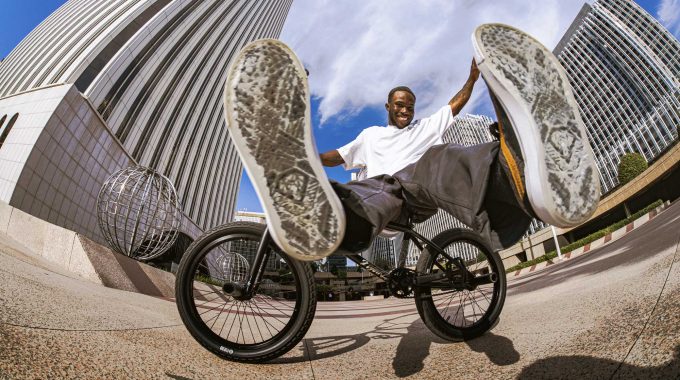 Balance & Patience. Another tidy product drop from from Vans BMX and Courage Adams... 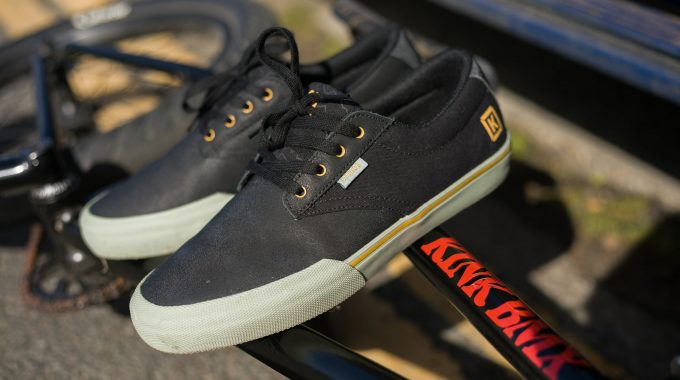 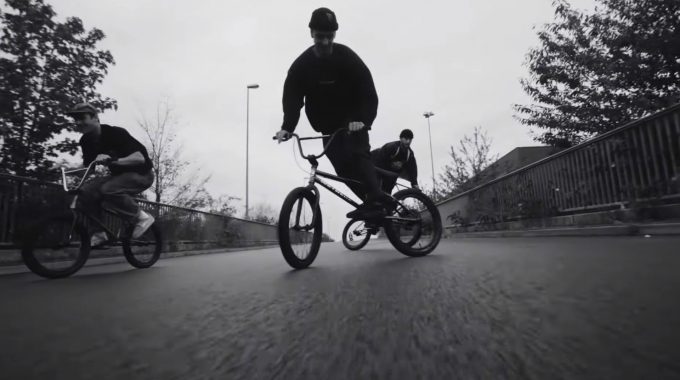 What year is it?! WTP don't care, they're blazing ahead with their new line of complete bikes via this slick little trailer 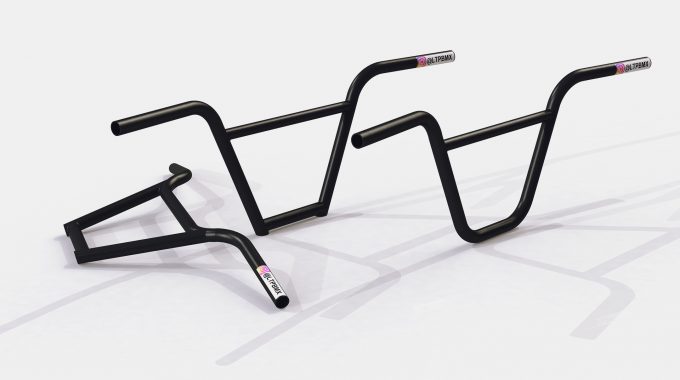 Stress testing different bar designs, varying amounts of backsweep and bar angle... Let's get into it.