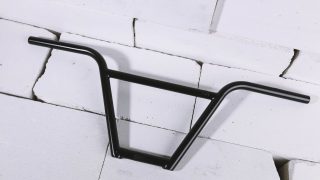 Federal Drop Bars have been around for a while. Why? Because they’re excellent bars, so they continue to be popular.

I’ve had more than one set of Drop Bars over the years. In my experience, they always have a great feel to them – the correct proportions, the right angles, a nice natural arm position, all the qualities you want from a handlebar.

“The correct proportions, the right angles, a nice natural arm position, all the qualities you want from a handlebar.”

These bars are now the V2, which means they’ve seen a few refinements since they were first introduced. The Drop bars are made from 4130 chromoly, heat treated in 20/20 Federal style, they feature butted tubing to save a little weight and have a neat embossed Federal logo on the crossbar. That embossed logo will probably be the first thing you notice on these bars, it’s another fine example of branding by Federal – classy and understated.

We spent some time with the new 4pc version of the Drop Bars. Needless to say, these things are solid. They come in sizes from 9” to 10” and are 29.5” wide – not small, then.

“The V1 4pc Drop bar was Federal’s version of a classic looking 4pc with the same dimensions as our 2pc bars. After these had been out for a while we had requests from team riders about making a 4pc with the same sweeps as the Churchill bar (3°upsweep and 11.5° backsweep), so we set about making a V2 bar. The style of welded joint used on the V1 is proven so we’ve continued to use this while updating the rest of the bar. The stem clamping area is now thicker to resist crushing and the bars now feature a larger radius to reduce the likelihood of bending. We’ve also changed the raised crossbar ‘F’ logo so it’s now much more defined.” –Federal Bikes

The feel of these bars is clearly a bit different to the 2pc, thanks to those updated sweeps, but they’re aimed a different kind of rider. Federal know their market, so the angles on these 4pc bars are different for a reason. They felt damn good to us.

Both the 4pc and 2pc V2 Drop Bars are available now. Something to suit all tastes.