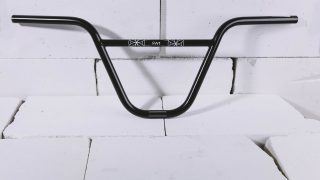 AK… Alex Kennedy… The man, the myth, the legend. An enigma of a BMX rider. Elusive, majestic, mystical… Magical? He is definitely some of those things. If you’ve followed his video edits in recent years, you’ll know that AK is clearly a spiritually-aware person with a wonderful respect for nature, and some of these qualities have fed through into his signature products from Cult.

Cult is quite the revered brand. Kicked off by Robbie Morales in 2010, it caused a fair amount of controversy when it was announced. It divided the then Fitbikeco. team, with some staying on and some (such as Alex Kennedy) moving over to Morales’ new squad. Since then, Cult has obviously been a huge success, with a strong company image, a diverse team of riders and some of the most trustworthy products on the market.

“AK himself might be some kind of magical enigma, but the AK bars aren’t too wacky – just a simple, classic handlebar.”

AK’s whole range of parts are designed to feature organic shapes and come in a nice mixture of colours, from his wildly popular (and huge, 2.5”) tyres to his signature frame, everything is emblazoned with flowers, leaves, spirals and circles, the flower of life is everywhere… In words that may not sound too impressive but in reality, the designs are very pleasing.

As you can see, the AK bars aren’t too wacky – just a simple, classic handlebar with a rather nice graphic containing the Cult logo. No crazy colours either, just black or chrome.

Geometry wise, these bars feel great. Twelve degrees of backsweep is around the most you’ll get on a set of bars these days, whereas the two degrees of upsweep is pretty standard. Combined with the generous width (30”), the result is a balanced feel, giving a natural position, no matter what size rise you choose. Cult offer no less than four sizes between nine and ten inches, so most riders should be covered.

The geometry also translates to a good looking set of handlebars. The shape is good, there’s a nice slow bend at the bottom and we think the crossbar is just right – not too high.