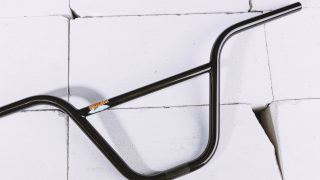 Mike Hoder is a big human. Big name, big personality, big riding. He needs big handlebars. S&M make a variety of Hoder bars, from the regular version to the taller ‘Hoder High’ bars to the even taller ‘Hoder Sky High’ bars that we have here. Consider this article to cover all sizes – they’re all the same high quality material and build quality.

Made in house at S&M HQ, the Hoder bars are a damn fine handlebar. Classic geometry on all sizes – 1.5º upsweep, 11º backsweep. We can verify that these angles feel superb. The Sky High bars we’ve featured here (recognisable with the Hoder ‘Hooters’ logo above the clouds) are 9.5” tall and a whopping 31” wide. Beasts!

If you prefer your bars a little lower, the Hoder Highs are 9” tall and the regular Hoder bars are 8.625” – they’re both an inch narrower than the Sky Highs too.