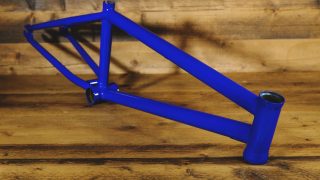 It’s hard to say anything about Nathan Williams without immediately jumping for the word SAVAGE. It just seems like the perfect way to describe Nathan’s riding. He’s been on the scene for ten years and in that time, it’s fair to say, he has helped push street riding to its current limit. Nathan has his opposite / switch game absolutely locked – he has to be the best guy out there for his ambidexterity on a BMX. He takes the gnarliest tricks (for instance an over ice down a handrail) and shows us he can do them on both sides. Opposite grinds and opposite spins mean no spot is safe – Nathan has every ability to shut them all down, doing so on the United Mothership frame.

“The United Mothership has been one of the best selling frames in BMX since its introduction.”

Started by Ian Morris in 2006, United Bike Co. has been pumping out some of the finest, most durable products on the market since its inception. Not unlike Ian’s riding, the brand is full-commitment and steadfast, all whilst maintaining one of the greatest BMX teams on the planet. With the likes of heavy hitters Corey Martinez and Nathan Williams on the team, plus key UK heads like Harry Mills-Wakley and Jimmy Rushmore, it is no wonder they’ve produced two of the greatest full length videos in BMX history, ‘This is United’ and ‘Still United’.

The Mothership has been one of the best selling frames in BMX since its introduction. The frame itself is built for progressive street riding, there’s no doubt about that – a 75.5º headtube and 13” chainstay make sure this thing is nice and manoeuvrable while the ovalised and tapered tube set ensures it’s resistant to heavy abuse from all angles. United have added a few nice branded details with the seatstay bridge and downtube gusset, but the choice of stickers is up to you.

Nathan’s video sections in Still United and Etnies Chapters are a showcase of some of the gnarliest, boldest and most precise street riding happening today. He won a Nora Cup this year, plus he took home the gold medal for  his X-Games Real BMX video part. Again, an absolutely savage effort.

Nathan works hard to make all these things happen, and he does it all on this frame. No wonder it continues to be so popular – the United Mothership is a legend.