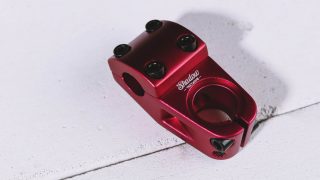 It’s not often you get two professional BMX riders collaborating on a signature product. When both individuals have more than enough calibre to already run multiple signature parts, it’s definitely out of the ordinary to share one. However, Shadow have always done things differently…

The Shadow Conspiracy has been a distinctive brand from the beginning. A slow, careful, dark series of adverts left people predominantly confused in the early days of the brand. Clips of kidnapping, unsavoury activities and horror film inspired sequences appeared in issues of Props, dark, ominous adverts appeared in magazines… It was all very much a mystery for quite some time.

“One of the best things about the Treymone stem? It’s very affordable.”

Shadow quickly established a signature style with regard to their design and artwork. You can immediately spot a Shadow product – they have a great sense of consistency in their products and branding, staying true to their style while still being original. There’s a strong personality. Shadow is Shadow.

Trey Jones and Simone Barraco are hugely popular riders. They’re both very distinctive – of course – and obviously get along like a house on fire.

“Introducing the Treymone Stem – a collaboration between two of Shadow’s most popular riders – Trey Jones and Simone Barraco. Trey and Simone both like the stack and rise of the Shadow Ravager Stem, but wanted to make a few changes. To start, they wanted to make it shorter, more responsive for today’s tech riding. Another was to make it strong and affordable as possible. Using smart design, we have again utilized the cold forging method of manufacture, just like the wildly popular Odin Stem. High quality, high strength, low price, just right.” –The Shadow Conspiracy

It’s a short stem, but not too short. 51mm provides enough give for nose manuals and the like, which is one of the things it was designed for. (Trey and Simone both spend a lot of time on the front wheel.)

The Treymone stem comes in a pretty wide range of colours, including whatever Shadow’s latest catalog-wide flavour is (usually something pretty interesting, like Arsenic) and is topped off with a nice little Shadow insignia behind the bar clamp.

Looks and specs aside, what’s one of the best things about this stem? It’s very affordable. Nice work, Shadow.