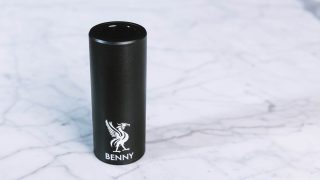 Ben Lewis, aka Benny L, is a big name in UK street. Scratch that – he’s a big name in BMX street riding worldwide. A huge name, in fact. Honing his quirky style of riding in his hometown of Liverpool, Benny L has pushed street riding his own way for the last decade or so.

What he does is ride all kinds of spots – some obvious, some unlikely – in a technical and precise way. I remember being very much in awe of a particular sequence in his Ride UK interview, where he 180ed over a bench, then half-cabbed over another. Tight, precise, skilled.

“The Animal Benny Pegs are the only pegs out there that come with an Animal Liver Bird on them. Fact.”

It’s not just technical, though… Benny’s got a unique style, both in his actual riding and also the decision-making that goes into it, which sets him apart from the rest. It’s this character that has formed his personality on a bike that people know and love, from his fans in the BMX community to his sponsors, such as Monster Energy, The Source, Etnies and Animal.

Animal and Benny got together to develop the Benny Peg. Animal is a brand that pretty much defines street riding, and Benny is an advocate of that. Few brands have garnered as much respect in our industry (and outside it, it must be said) as Animal Bikes. Think of New York City street, think of BMX and hip hop, think of Ralph Sinisi, Bob Scerbo, Butcher, Edwin Delarosa, Tom White, Chase Dehart or Benny L (to name but a few)… Think Animal.

The Benny Peg is a plastic peg (Nylon blend) with a 7075 aluminium core. The core is internally butted to save weight, and each peg comes with a spare sleeve – winner. It’s available in 4” and 4.5” lengths and is designed to grind everything and last a long time.

Last thing – we can now confirm it’s the only peg out there that comes with an Animal Liver Bird on it.