Back by popular demand! Our original 10 CRAZY WALLRIDES video clocked up over 5 MILLION views views we decided it would only be right to do a Part 2 vid and include a few incredible wallride we couldn’t fit in the last one. So here we are… Here’s the full edits featuring 10 of the craziest, burliest wallrides we could think of. Brace yourselves, it’s gonna be a wild ride…

Proper – Bon Voyage is a personal favourite of mine. It dropped just over two years ago now (damn time flies!) and Mike Miller‘s insanely big curved wallride ender was pretty memorable. Using cheap cola to make the wall sticky was such a genius idea too, definitely will have to remember that one!

Filmed and edit by: Robin Pearson

You already know the wallride I’m talking about right? This Ryan Sher part is pretty iconic, I’m sure a few of you’ll probably agree. The wallride in question of course, is the curved one down a huge of stairs with a roof that could possibly take your head off! Yep, that one. Nailed so clean too…

If you’ve never seen this just look out for 1:42 during his part in The Shadow Conspiracy – “Into the Void”

Another nice guy who featured in our last video and was willing to give us his opinion was Stefan Lantschner. I asked the same question, and guess who he suggested… 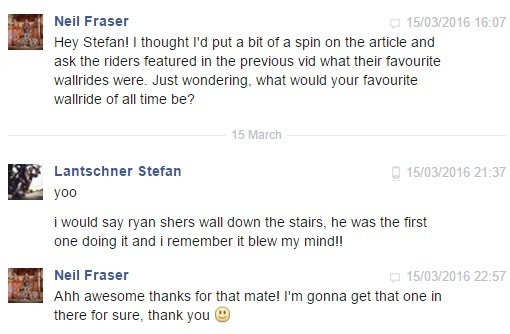 This one had to make it in. An impossible looking gap to wallride by Nick Castillo during his 2014 edit. The entire video is packed with hammers and quite a few curved wallrides to be honest, but the wallride in question is at 1:46.

Gary Young has been slaying wallrides for many years now, but his ender from Odyssey Electronical was one I just had to stick in there. We even had people on FB demanding that it should be in the next video! (LOL) So here it is… The curved wallride to oppo curved wallride ender in all it’s glory. Sure he slipped out due to loose dirt, but we reckon it counts!

Jay Miron‘s part from the first Macneil DVD was mind-blowingly good. I remember watching this growing up and thinking Miron could ride anything, never witnessed him riding street before so it totally amazed me. This one was one of many suggestions from Jason Phelan… (I will be saving a few or Part 3) – Clip at 4:23.

“Jay Miron in an old MacNeil video where he done a wallride to pegs, I remember that blew my mind back in the day.” – Jason Phelan.

Steven Hamilton‘s oppo curved wallride to 360 absolutely blew my mind when I first watched PROPS – Roadfools 12 and still does to this day. Stevie was and still is such an inspirational rider, no pegs a back brake and a shit-load of talent and originality.

When Mutiny Bikes rider Rubio dropped in to do this insane curved wallride my heart kinda sunk for a moment, I thought he’d just go splat against the wall but he rode out of that wall like a champ! Too good.

This is just straight-up bonkers! This insane curved wallride ender from Sunday Bikes‘ rider Garrett Reeves is a complete banger, the height he gets coming out of the top of that wall shouldn’t be possible! Made it look so casual too.

One of my favourite video parts of all time. Ruben Alcantara is the god of all wallrides and his section in Etnies – Forward proves just that. This one was suggested by Drew Bezanson and we had to bang it in there, you can’t make a wallride compilation vid without Ruben afterall!

Drew Bezanson was in our previous 10 Crazy Wallrides video and for good reason too! That curved wallride in Uncontainable was one of the craziest things I’ve seen, the drop itself made my stomach turn and wasn’t worth thinking about. Seriously though, getting into that ‘do or die’ mentality is one of Drew’s talents and he’s made it into the second video for good reason too…

Rewind back to 2012 when LDN got a taste of the Bezanson treatment during the time he was filming for Props – OWNED. I think it’s fair to say that this high speed gap to wallride at South Bank will go down in the history books. Unbelieveable. Drew looks at things differently as you’ve probably noticed by now, I mean who’d look at that set up and think, “yep! I’m gonna wallride that!” – Mental.

I caught up with him recently via Facebook to ask a quick question about the article and he was more than happy to answer a quick question for me. Sound guy! Needless to say I’ve included Ruben in this one again (above), I mean the guy is basically the king of wallrides. 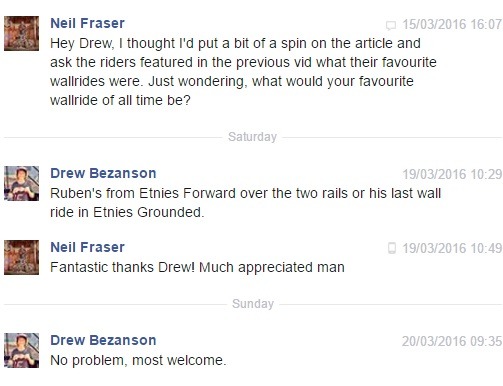 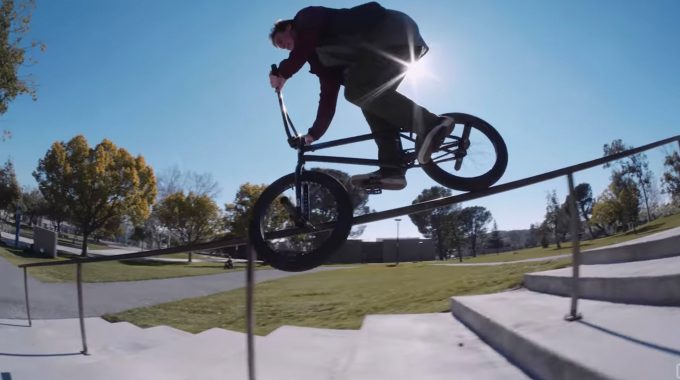 Seriously, this lad can do whatever he wants on a bike. Travis Hughes raw footy shows how the opening section of CHAMPAGNE came together. 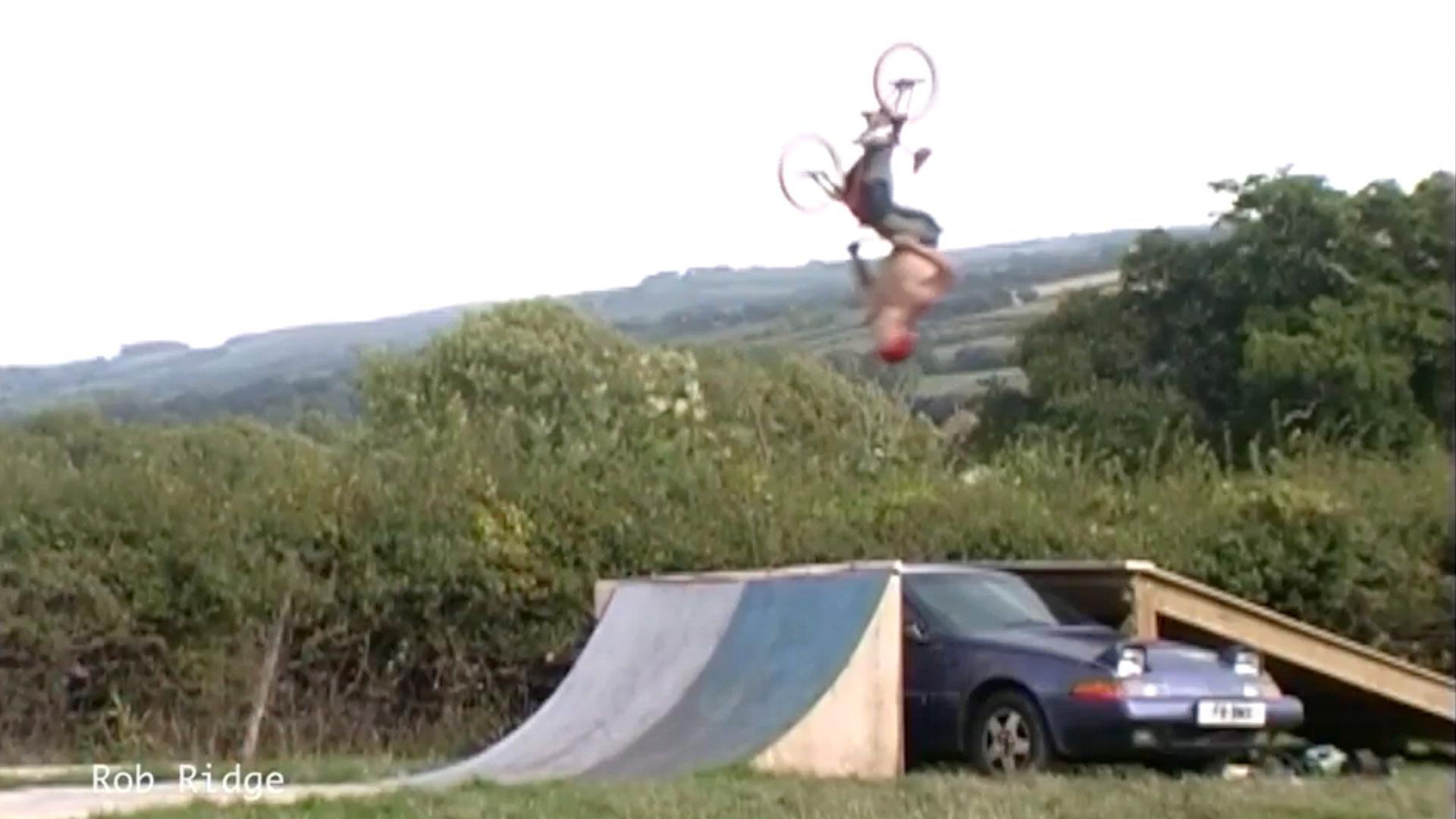 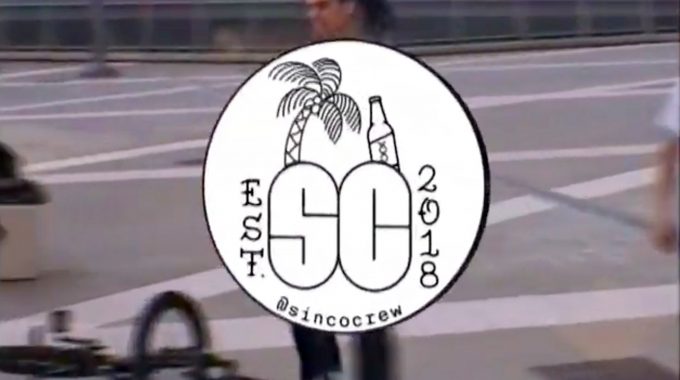 Milan park and street mix filmed on an ancient Handycam and cut to Black Sabbath... What's not to like? 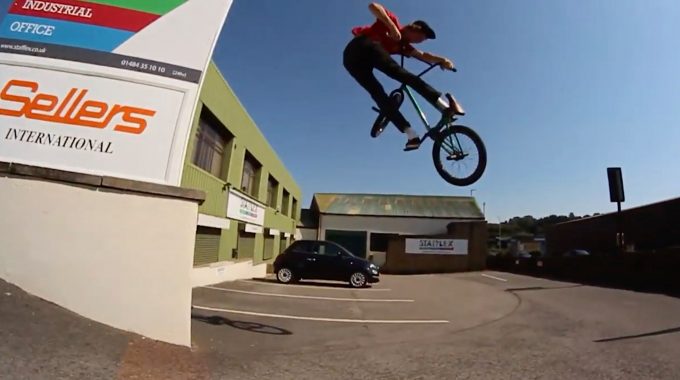 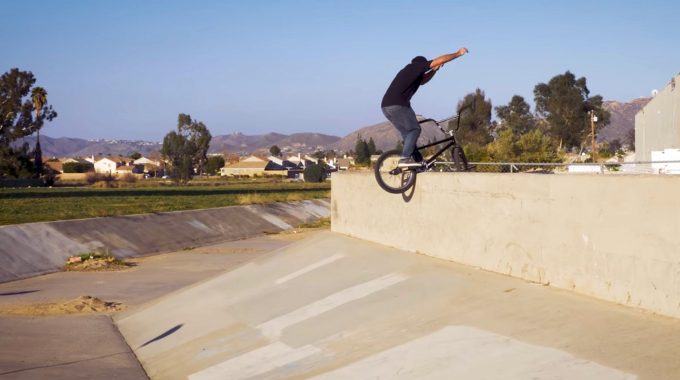