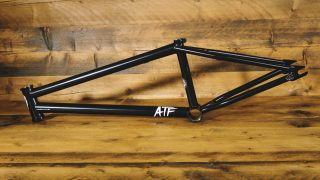 The good guys at S&M are more than happy to make you a custom frame, should you need one, but for now let’s check out the S&M ATF.

“The ATF is the benchmark that S&M have used for a while to develop their team riders’ signature steeds.”

I mentioned S&M is a real BMX brand. The proof of this? They manufacture the vast majority of their products in house. Yeah. The S&M workshop is the real deal.

ATF = Alcohol, Tobacco & Firearms = All Terrain Frame. Clearly then, the S&M ATF is a well rounded BMX frame. You can do whatever flavour of BMX you like on this bad boy. It’s the benchmark that S&M have used for a while when developing their team riders’ signature steeds. It’s also the choice of most of the S&M employees, and those guys know what’s up.

“It’s a little stronger and heavier than some of the frames on the market but it’s what people that really ride want. Stylish, classic, and burly all rolled up into one.” –S&M

The geometry is wonderfully balanced, as you’d expect. One more note on its versatility – the ATF is available in seven toptube lengths, all the way from 20” up to 22”. Mega.