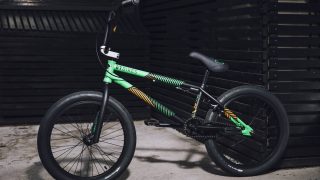 GT is a legendary brand. Their history goes back to the mid 1970s, when Gary Turner first welded together a BMX race frame.

“BMX was the foundation for the GT empire. It was our foray into bikes, and drove the passion we are lucky enough to follow every day. The current GT BMX Lineup is designed to fuel your fire and get you stoked on going bigger, faster, and further.” –GT

GT went on to do great things in the mountain bike world. A few years ago they returned to BMX and started making some serious moves, getting a solid team together consisting of heavy hitters such as Brian Kachinsky and Jason Phelan.

“After Jason Phelan had such a crazy year in 2016, the GT JPL signature bike got a full redesign.”

Phelan has done a lot in BMX. In honour of this, GT awarded him his own signature line of complete bikes, with some funky colours to suit his tastes… The first GT JPL Team design was pretty out there, but Jason’s always been out there with his ideas, most notably in 2016’s ‘Loch Down’ project.

“2016 was a very important year for me. I learned so much, From landing my first proper World First (Pegs to backflip barspin) to then creating Loch Down, my biggest project to date. I was pushing BMX in the direction I always wanted, bringing my wildest dreams to life and all because of a BMX. Who would have thought that when you buy your first BMX you can create and bring your dreams to life in the near future?” –Jason Phelan

After such a beast of a year, Jason’s signature bike from GT got a full redesign, inspired by his achievements. Even the graphics on the 2018 model are based around past projects. Jason says they have an important place in his life so his signature complete bike is the perfect place to put them.

“‘DREAMS START WITH A COLOURFUL YET SOLID BMX’ or so my mum keeps telling me anyway… I’m happy with the whole bike. For somebody who wants to get their BMX dream rolling this is a perfect all rounding riding machine.” –Jason Phelan

Jason continues to believe that a bike can take you anywhere, and this little world of BMX could get you dreaming just like him.