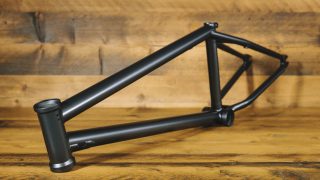 The Fiend Varanyak is a beast of a frame, fit for the best street riding in the world. Let’s check it.

Fiend forms the outlet of that kind of riding – the perfect blend of super technical skill and brutal gnarly massive big-balls riding. As Brian Tunney once said, the Fiend crew may very well ride a one-foot-high ledge but they’ll also truck off the roof next to it. Fiend’s success as a BMX brand has been carried purely by amazing bike riding – exactly as it should be. Zero gimmicks, pretty much no marketing, just a solid crew of riders who absolutely slay the world of BMX riding on a regular basis.

Colin Varanyak is one of that crew. Colin’s technical ability is quite astounding. If you’ve seen the ender from The Animal House video, you’ll know what I mean.

The Fiend Varanyak frame is designed around responsive geometry and a super strong front end – just check those gussets.

“I’ve always had a thing for short back ends, so it was one of the main features that would help younger kids learn how to ride street. When I used to race my dad would dremel out the dropouts to help make the back end shorter. Since I was little I didn’t have the strength to pull up and manual the bike. It made such a big difference. With street riding it’s a lot of technical riding. Less resistance pulling up just made sense to me.

I really like the bottom gusset, and head tube/BB angles for the bearings. I’ve always been into the old E30 M3 so I wanted to give my frame that boxy look. It’s just a really easy bike to ride and do anything on. Easy to bunnyhop and spin on flat ground. Kids always hit me up telling me how much easier it’s made their riding in general.” –Colin Varanyak

There you have it, then. The Fiend Varanyak frame – easy to hop and spin, BMX M3 inspired, Fiending…