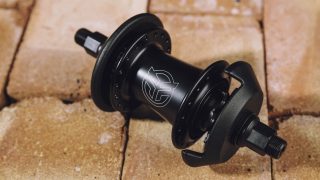 Federal have been perfecting their freecoaster for a while. Based on the proven KHE internals but with an additional thrust bearing, this hub has been a solid choice for a few years now.

One thing that’s changed recently is the hubguard. In their pursuit of perfection, Aggie Lau and the guys at Federal have designed, tested, redesigned, tested and gradually developed a much more advanced hubguard than many other hubs offer.

“The V4 freecoaster is the result of constant improvements we’ve made over the years since releasing our first freecoaster hub many years ago. Internally the hub is the same as our V3 however it includes driveside and non-driveside nylon hubguards. The guards themselves took quite a while to develop and are fully interchangeable between the freecoaster and Stance cassette hub. The first version of the driveside guard was completed and ready to go into production but after extensive testing of the samples we weren’t 100% satisfied with the durability and decided to go back to the drawing board and make further improvements.

“This hub has been a solid choice for a few years now, with its proven internals and advanced hubguard design.”

Whilst a seemingly simple part, our driveside guard has a lot going on beneath the surface. The shape is an off-centre oval that blends into a circle, this was a very complex shape to both design and model. The result is that the guard has less surplus material at the chain cut-out and so can be slammed further into the frame while allowing the top, bottom and side to all feature the same increased wall thickness. This makes it much stronger compared to other guards while still retaining the protection and appearance of a traditional shaped guard.

The hardware was also designed to use the same axle without increasing the width so anyone with a previous Federal coaster or similar hub can simply buy the hubguards with cone nuts and swap them over.” –Federal Bikes

Available with male or female axle, left or right side drive. It’s also available as a complete wheel with the Federal Stance XL rim. The colour? Black only. Pure street…