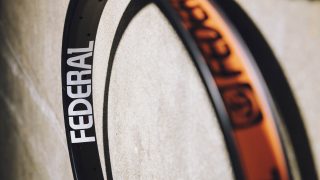 The Stance XL rim has a 40mm cross section, which is definitely pretty wide. You can see the difference just by looking at it. This thing has some girth. Federal have designed it this way to fit with modern tyre sizes, aiming to help the tyre sit right on the rim, keeping its intended profile.

“In the day-to-day world of a BMX rider, the design features on this rim are intended to make life easier.”

Mega width, then. But what about the height? Again, a noticeable difference – the Federal Stance XL has a lower sidewall height, further emphasising the low and wide appearance. It measures at 15mm, which is significantly less than the 20mm found on many other rims.

The extra width, combined with a triple box section construction, Federal claim makes the rim stronger and stiffer than others. It’s not just that, though. They also chose 6066 aluminium over the more common 6061, for increased strength reported at 30%.

In the day-to-day world of a BMX rider, design features on the Federal Stance XL rim are intended to make life easier. The wider profile should help reduce the threat of pinch flats, increased wall thickness around the holes makes the nightmare of spoke pull-throughs much less likely and the sidewalls are designed to keep tyre beads firmly in place, while also being sunken enough to make installation and removal of tyres straightforward. Good!