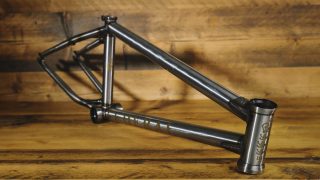 Dan Lacey, big gnarly street 360 legend of our generation, has been riding for Federal since 2005. With several tattoos of the brand, it’s fair to say Lacey is down for life. His passion for it all means he’s managed to play a significant role in the running of things at Federal, so it’s as much a part of what he does as he is part of the brand itself. Dan Lacey and Federal, through and through.

“The Federal DLX is designed to handle the Dan Lacey abuse, which means it’s strong, manoeuvrable, dependable and versatile.”

In 2015, to mark a decade on the team, Federal updated Lacey’s already hugely successful signature frame, crowning it the DLX.

“The DLX frame was one of those where the idea and concept came together really quickly but making it an actuality was a lot harder. We knew it was time to refresh Dan’s frame and he pretty much got the geometry spot on with the original Lacey frame however we knew there was still a lot we could do to make it visually up to date and also improve small areas such as tyre clearance. The investment cast seatclamp was the first new part we drew for the frame, we wanted to strike a balance between a really minimal shape while still maintaining the traditional look of a seatclamp. This was finished with the same off-centre logo placement as we use on our stems. Once we had the look and feel of the seatclamp finalised we had a design aesthetic to work to, the dropout shape followed this by being small with minimal contours while still resembling a classic dropout. Dan also wanted built in chain tensioners so the dropout was thickened to 6.5mm to include them. These new features combined with making the rear end tapered helped bring the frame right up to date while still retaining the feel of the classic Lacey frame.” –Federal Bikes

This frame is a true street machine. You only have to look at Lacey’s videos to see the kind of tasks it’s up to. It’s designed to handle the Dan Lacey abuse, which means it’s strong, manoeuvrable, dependable and versatile. One thing that might surprise you is the level of detail on this frame though – it’s not just a burly street beast. There are numerous little touches that really add appeal to the DLX, nicely designed, subtly branded.

These elements of strength, detail, rider reputation and brand history all add up to crown the Federal DLX frame as a real street classic.