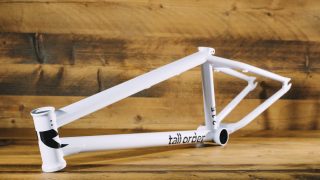 When Bas Keep started his own BMX company in the spring of 2016, it was big news. Bas has endured a legitimate career as a pro rider, both as part of the Seventies Distribution family and with massive companies like Vans and Red Bull. After putting the years in with Hoffman Bikes and then Cult, Bas took a pretty big leap forward and started his very own BMX company, playfully calling it Tall Order. Soon after, two frames were announced. We have the Tall Order 215 here.

Under the Seventies wing, Tall Order has some pretty amazing resources at its disposal with regard to design, promotion and obviously distribution, not to mention Bas Keep’s wealth of experience in the BMX industry.

“The geometry on the Tall Order 215 is a good balance for most kinds of transition riding.”

Onto the frame then. The Tall Order 215 frame is so-called due to its standover height in millimeters – that’s 8.5” by the way. They also offer a similar frame, the 187, with (you guessed it) a standover of 187mm for shorter riders or those who simply prefer a lower standover.

The geometry on the 215 is a good balance for most kinds of transition riding. 13.5” chainstays give enough kick without being too whippy and the 11.6” bottom bracket height is low enough for some extra pump and stability when going fast. This is one of the only frames in our lineup that’s available with a 21.5” top tube – definitely a good shout for the taller guys.

“Bas is very interested in the aesthetic of frames and so once we had the geometry sorted we spent a lot of time making tiny tweaks to get the look just right. We even drew up various 3D renders complete with stickers to simulate how the frames would look so we could make better decisions on what would become the final version.

We chose tubing that gave the frame an ultra-sleek appearance when viewed from the side – if you look at the chain stay on a 215 compared to other frames it has a tapered tube that’s also swaged, in other words the tubing diameter increases gradually before quickly stepping up in size by the bottom bracket. Bas also had strong ideas of things he wanted and gave me a lot freedom to explore these ideas. For example, he wanted the top of the seat tube angled and instead of welded on seat clamp bolt tabs we suggested trying an angled investment cast seat clamp – this ended up giving the frame a really unique look which has become one of the trademarks of Tall Order frames.” –Aggie Lau, Product Designer

Tall Order are proud of their unique investment cast seat clamp, as it’s been nicely angled to line up with the seat stays. Add in the simple sticker set – with the transition inspired logo on the sides of the headtube – and it all makes for a nice clean look.