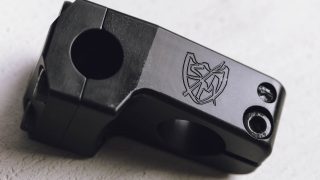 It wouldn’t be a product guide without the S&M Redneck stem. (Or Shredneck, we’ll take it.) It’s the iconic front load BMX stem.

“It wouldn’t be a product guide without the S&M Redneck stem.
(Or Shredneck, we’ll take it.)”

The original S&M Redneck stem came out in 1992. CNC machined from a solid billet of 7075-T6 aluminium with ‘REDNECK’ engraved across the top, it only came in red (‘Redneck’ – simple) and like the rest of S&M’s products was proudly made in the USA.

It’s seen many refinements in the last 25 years but it remains fundamentally the same. Don’t fix what ain’t broken, as they say. This latest version, the Shredneck, has a shorter reach (50mm) and slightly less drop. S&M say it’s a refined Redneck. Whatever, it’s still an S&M Redneck to us, so it’s still a classic.