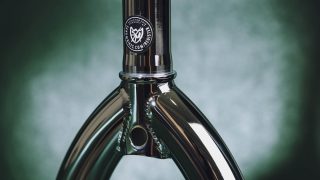 Here we have yet another legendary product from S&M… You can’t argue with the results – Moeller and the guys know what they’re doing!

“The S&M Pitchfork may be a classic BMX part but that doesn’t mean it’s not bang up to date.”

The Pitchfork (race version pictured here, one for the trails heads) may be a classic part but that doesn’t mean it’s not bang up to date. S&M have made sure their flagship fork keeps up with the times, so you’ll find these guys made from nicely tapered, double butted 4130 chromoly and finished with S&M’s tried and tested ‘4Q Baked’ post-weld heat treating process.

Proudly made in the USA in house at the S&M workshop, with a truly legendary reputation, you can’t go wrong with a set of Pitchforks.