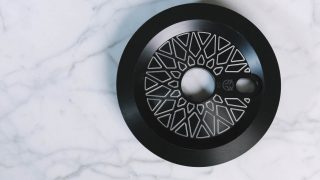 The Federal BBS sprocket has to be one of our favourite sprocket designs of recent years. The spoke style pattern may have been done before, but the Federal design really nailed it. After the original BBS sprocket came a solid version with the design machined in, and now we have a super strong bashguard setup.

Federal Bikes was launched by Seventies Distribution in the year 2000. It’s certainly been through a few different chapters as the landscape of the BMX industry down in Hastings has changed, but Federal continues to be, without question, one of the UK’s strongest BMX brands. Their team over the years has been consistently strong – from international big dogs like Davey Watson, Jared Washington, Stevie Churchill, Bruno Hoffmann and Steven Hamilton, to homegrown heroes such as Dan Lacey, Mark Love and Dan Cox.

Federal has always maintained its status as a honourable brand to represent, which has translated into the success of its products, both in the UK and further afield. Federal has earned global respect.

First things first, this thing is solid. It’s made to take some abuse, and you can tell. It’s a seriously robust looking beast. You’ll have all your sprocket-bashing needs covered with this. No broken chains, no bent sprockets.

Aesthetics wise, this has to be one of the best looking bashguard sprockets out there. The name BBS is a big nod to the spoked designs seen on BBS car wheels. The one we have here has the CNC machined design revealing the silver beneath, but you can also choose to have all black or all polished. The laser-etched Federal logo is a sweet little addition – it looks amazing when it catches the light.

If you need sprocket or chain protection for your riding, the Federal BBS is a damn fine choice.