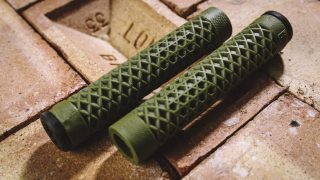 Six years ago, Cult wanted to see if the Vans waffle pattern would fit hands as well as feet. This grip is the result.

One of the Vans slogans is ‘First in BMX.’ Vans have been making shoes since 1966, Cult have been making BMX parts since 2010 (although arguably long before that with the people involved) and together they make some interesting collaboration products. They’ve joined up to make shoes with different team members and with ODI’s help, they made the hugely popular Cult x Vans grips.

“Cult wanted to see if the Vans waffle pattern would fit hands as well as feet. This grip is the result.”

When these grips were introduced, there was a fair amount of hype – and rightly so. It was a big deal. Cult and Vans making a BMX product together is definitely cool.

It’s not all hype though, these grips are also really comfy! They’re super soft and sticky, with a different feel to the traditional ribbed grip. That waffle pattern feels surprisingly good on the hands and has remained the choice of plenty of pro riders since the introduction of this grip in 2011.

These are made from a high quality rubber compound by ODI in the USA. With the legendary reputation of ODI behind the manufacturing, you know these are going to hold up well.

If you like a soft, squishy grip and love to rep either Vans or Cult (or both) then these grips are for you. Wait, why am I telling you this? No doubt you’ve seen these grips on plenty of bikes already. They are wildly popular for a reason – they rule.