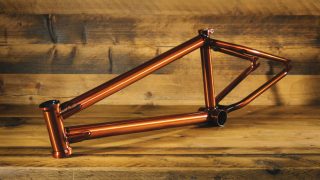 When this frame arrived and we unpacked it, gasps were heard echoing around the office. The paintjob is that good.

This ‘Shorty’ frame (with Sean Ricany’s awesome signature colourway) is built for the streets, plain and simple. Tech street riding is where Ricany excels and this is the frame he does it all on – although we’re sure this geometry would probably feel quite at home in a skatepark, too.

With a headtube angle of 75.5 degrees, that front end is going to be highly responsive. A relatively high bottom bracket height of 11.7” will provide extra pop when you need it and the 13–13.3” chainstays make sure the back end has more than enough control. Plenty of top tube lengths are available on this frame, but as the name suggests, perhaps this is aimed at the shorter riders. Disregarding the longer options, this is one of the only frames we’ve seen recently available with a 20” top tube. Definitely a solid option for the shorter / younger riders out there.

The Shorty arrives clean, but with an ample supply of Cult and Further (Sean Ricany’s clothing brand) stickers for you to adorn it with as you please. Other notable points on this frame are the tidy double gussets and the seatstay bridge, with nice Cult branding. S-bend chainstays give you enough room for 2.4” tyres and the dropouts are 5mm, heat treated with a super clean shape and joint with the tubes.

“Gasps were heard echoing around the office when this arrived. The paintjob is that good.”

Now, let’s talk about that paint job. It’s incredibly deep and rich – there’s pretty much every kind of orange you can possibly imagine in there somewhere. From the tubes to the welds, it’s a world of lush fiery hues. Seriously impressive. We’d be scared to scratch it!