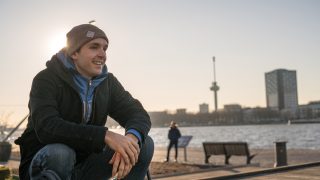 Max Gaertig has stood the test of time. One of the first German street riders to make it over in the USA, and maintain a spot on the prestigious Animal Bikes team, Max has been murdering it on a bike for nearly two decades and shows no signs of slowing down.

Max and myself decided to take an impromptu trip to Rotterdam back in March to stack some footage for Max’s new Wethepeople Madmax 10.2” handlebar promo. Despite a sunny forecast of 13ºC the week before, when we finally arrived in Rotterdam we were greeted by an unpleasant barrage of snow, ice and –15ºC heavy winds, basically the coldest riding conditions I’ve ever encountered on a BMX trip and and creepy parallel to HBO’s ‘The Terror’ but with less giant man-eating polar bears and more Mushroom Croquet Bagels.

If that wasn’t bad enough we were introduced to the effectiveness and ruthlessness of the city’s parking officials and received a nice €180 parking fine within the first 15 mins of arriving in the city. Needless to say, not the best start to a trip. Despite it having been so cold that the ice on the street didn’t melt and having to stop every few hours or so for a mandatory coffee to return to a body temperature above zero, we ventured out into the streets of Rotterdam with the sole intention of getting at least one clip and some photos. The true professional Max Gaertig is, he really went in and came away with the goods, but not without a struggle and severe risk of frostbite…

– Max, why are we in Rotterdam during a snow storm? Why are we riding in –15 degree winds, and how much did you pay for those gloves?

“Why Rotterdam indeed. The original plan was to make use of the first sunny spring days – which is what every forecast said! – and ride sweet street spots because that’s what Rotterdam is famous for.

I remembered this city from an old Animal trip and Dave mentioned it a bunch of times having been there with the Radio Bikes team. The fact that we got caught in a ‘harsh Siberian front’ (quote from the then corrected weather forecast) was absolute shit luck and resulted in a high need for rum and coffee each day.

On the first day I bought the aforementioned gloves at a market for €4.99, which was pretty much the first time in my life I ever bought gloves. We rode around afterwards for a bit carefully dodging the snowstorm winds, but only after we were able to warm up in a parking garage. At least the snow didn’t stick so the ground was still fairly dry enough to go spot hunting.

The weirdest thing was that there were barely any people around. I know Holland as a very outgoing sort of place, with bikes, skaters and smokers roaming the sidewalks. But not this time, apart from some die-hard tourists it was extremely empty everywhere which ironically made it easier to ride the otherwise crowded spots.

All in all it was pretty cool (no pun intended) that we actually went out to ride everyday. I do feel sorry for Dave, though, because when he was filming he had to stay/ sit in one spot which was way colder than riding and trying to keep up the body temperature.” 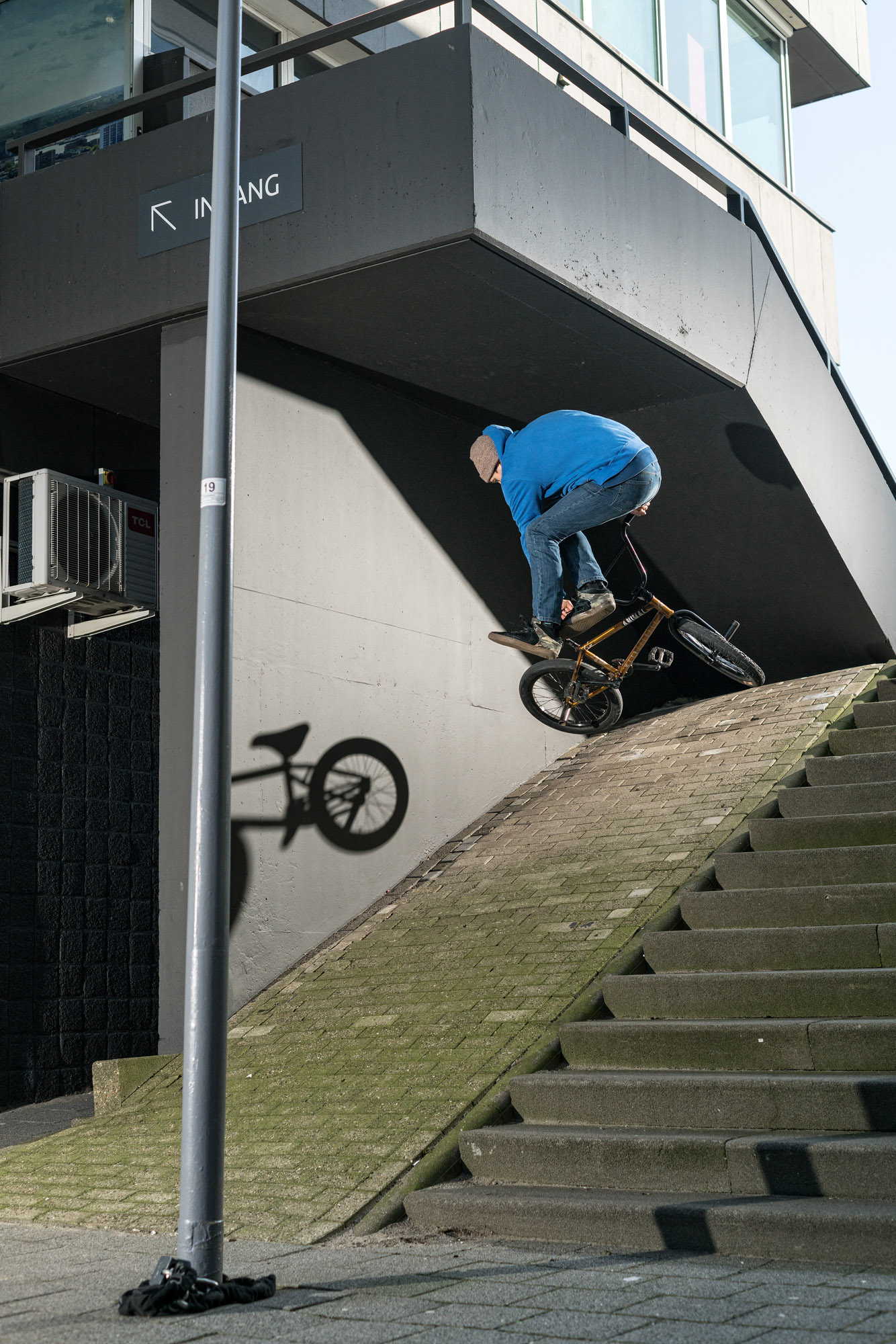 – What goes through your mind when you’re trying to land a trick for the first time and it’s so cold that you can’t feel your toes? Explain the trick on the marble ledge, how long did it take to pull and how does this thing even work?

“The marble ledge was way too good as to not try the trick on it. Such a nice spot with decent grinds, especially after we applied wax to it. I had been thinking about this combo for a while and tried it a bunch of times in the skatepark. This needed to happen on street, so I gave it a shot. Usually the state of mind you have is, “Just go, go until it works out somehow” carefully adjusting the different aspects of a trick. But in this case it was more like, “Take your chances and at least try to keep moving without freezing to death”.

“In this case it was more like, take your chances and at least try to keep moving without freezing to death.”

To approach the ledge I had to ride against a harsh wind from a river which made it much, much harder than it needed to be though. That wind was ultimately the reason that at the end of the day my lips split open and stayed dry as dust for like two weeks.

In the end I was of course beyond feeling relieved having pulled the trick after 2-3 hours, but everybody else was almost frozen solid by then – sorry dudes! Didn’t Dave count like 190 tries or something? Pretty funny actually. Worse was that I pulled one, but couldn’t quite ride away from it, all part of the fun. Yet another half cab-whip combo, but I like the grinding backwards part of it. Just one important note: Combos take much longer to learn after you’re 30 years old, haha.”

– Rotterdam is one of the most spot packed cities in Europe. Can you explain just how many decent spots you saw whilst you were here?

“Rotterdam has a little of the ‘Barcelona feeling’ to it, you find so much stuff by just riding down the street. We encountered interesting bumps/ banks in a parking garage, rails in weird places where you wouldn’t expect them, a ship with a slight bank, and even big setups. Definitely a great place to go filming. We did get some stuff done, even in horrible conditions, so it was still worth it for sure.

In Rotterdam, you wouldn’t even be mad to find some skate-stoppers on rails because there would always be another spot around the corner. Definitely a place to go back to, also because it is rather close to me. Basically as far of a drive as Frankfurt, only with higher speeding tickets and parking fines. The city has great bars, too, we drank amazing zombie cocktails from a burning glass skull which was weird, but delicious. Cannot wait to go back and explore the city some more. Let’s have another look at it Dave, the temperature can only go up…”