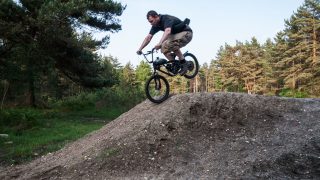 When an old friend and lifelong BMX rider tells you he’s putting an engine into a BMX frame, it sounds like one of those cool ideas that’s probably never going to happen. A motorised BMX? Whatever.

But three months later you find yourself hurtling through the woods, desperately trying to hold onto a BMX-shaped object with a two-stroke engine screaming a few inches away from your shins. Then you remember that the friend in question was born with a toolkit and a welders’ mask, as opposed to a silver spoon. He might even have allen keys for fingers.

We caught up with Tom Linsell, the creator of the ‘PMX’, to find out more on his motorised BMX project.

Words and photos by Ben Pearson

– How did this all start?

“We were off-roading, came to the end of a green lane, and found a knackered old moped in a muddy puddle. We dragged it out and discovered it didn’t have the original engine. After a bit of research, it turns out that it was a Chinese kit made to motorise a bicycle. I got it running again, and then decided to put it in a BMX as that’s the smallest bike that I can fit on. So I stripped it, cleaned it, did some basic tuning, then bought a very cheap BMX off eBay.”

– Tell us about your history with BMX, and also engineering.

“One created the other. Bikes break, and then you have to learn about engineering. That’s probably how I ended up in engineering; bikes were the only thing that I wanted to do when I was a kid, so that’s what I did.”

“I found a knackered old moped in a muddy puddle. I got the engine running again, and then decided to put it in a BMX…”

“Well as an engineer, with a garage full of broken bikes! I’d love to say something profound…”

“Oh yeah, I’m a dab hand with superglue and butyl, and felt tape!”

“No idea, I think it’s an Apollo. It’s made of toffee; the softest steel I’ve ever worked with!

I cut the downtube out, took the cranks out, and made some pedal footpegs with a bar welded across the chainstays. The downtube I cut and welded in using some spare steel I had. The seat was made from an old welding gauntlet, and I added a hand beaten rear mudguard. The paint is seven layers of contrasting colours, sanded through to look worn. I also customised the sprocket a bit.

“The only part of the engine that hasn’t been fiddled with is the con rod. Everything else has had bits cut off or added to it.”

Once I’d got it working I took it all apart again, started tuning it, and continued developing it a little bit at a time. When we started it managed 19mph; now it does about 29. Those engines are only about 2 horsepower, but since then I reckon I’ve doubled it. So still only 4 horsepower.”

– What have you changed in the engine, from stock?

“It was a piston port engine; now it’s got a reed valve, so the piston has a massive hole cut in the side of it. The cooling fins were cut off one side so I could weld a chamber for the reed valve. It’s got a custom longer intake that dissects the seat tube. It has a carburettor from a 90cc motorbike. The bottom end has been lightened and balanced, and the crankcase has been stuffed so there’s just enough space for the crankshaft. The exhaust port roof was raised by 8mm so the exhaust port timing is now 185 degrees. The intake port is ground out to be freer flowing, and the exhaust has no baffles in it. I took 2.5mm off the top of the block because the compression ratio was nothing, and skimmed a bit off the head as well. Lots of fiddling! The only part of the engine that hasn’t been fiddled with is the con rod. Everything else has had bits cut off or added to it.” 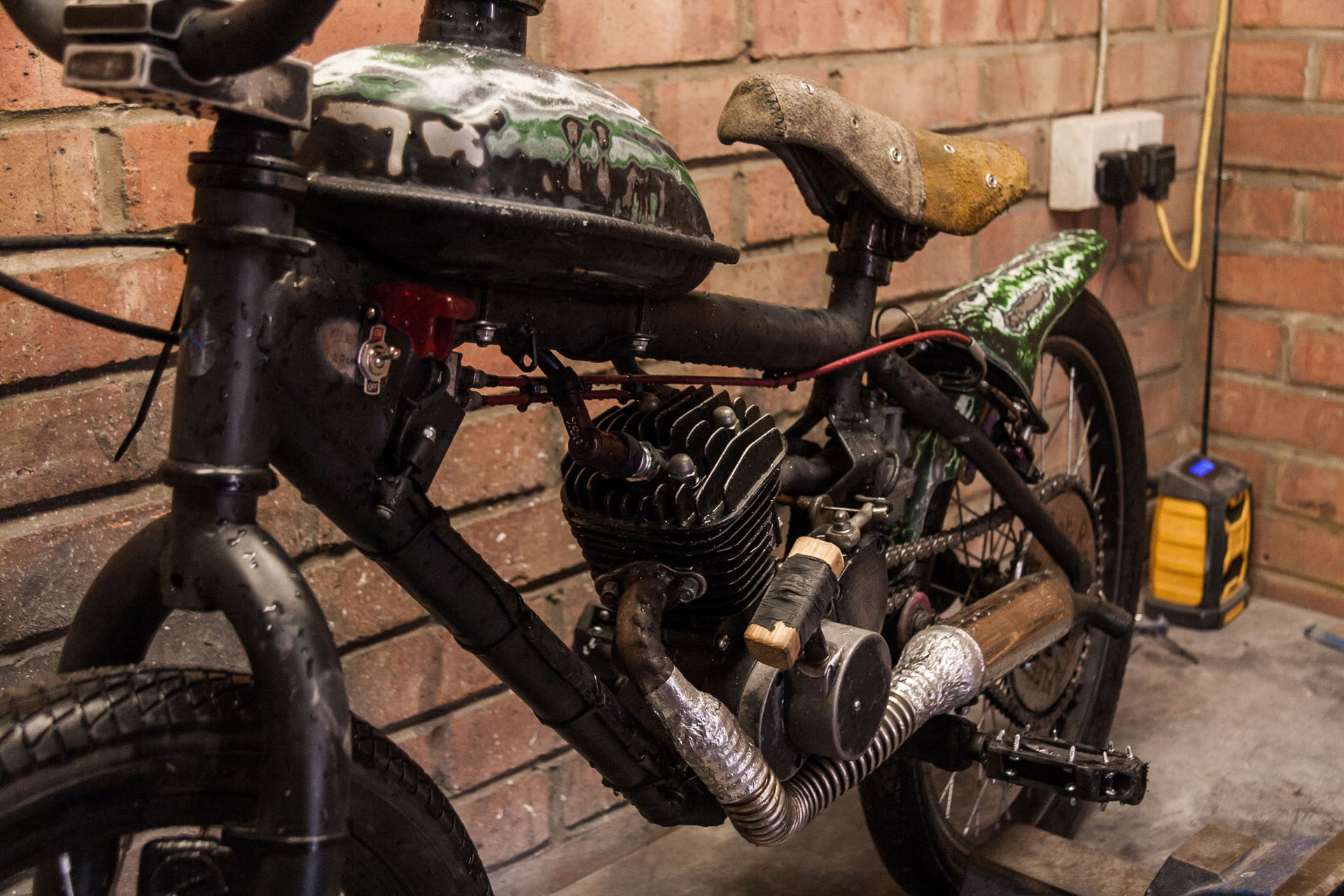 – What does it displace?

– How about the one lever brake and clutch set up?

“It’s got a manual clutch, and there’s no way to convert it to a centrifugal one, so it needs a lever. Also I didn’t want to have the brake lever on the right hand side because I’m not American.

I tried to replicate a gyro cable, but a serviceable one with more travel. I made a slider to fit inside an aluminium channel. The cable from the lever goes to it and then splits to two; one to the clutch, one to the rear brake. Just as the clutch disengages the rear brake starts to drag, so if you pull the lever in you’ve got brakes and no drive.”

– Such a neat solution!

“It was a pain in the arse, but it works quite well. It’s all pretty basic engineering, just taken to a ridiculous level!” 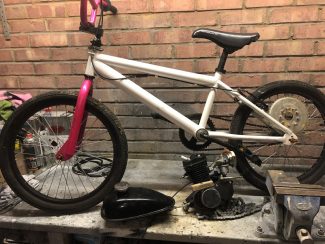 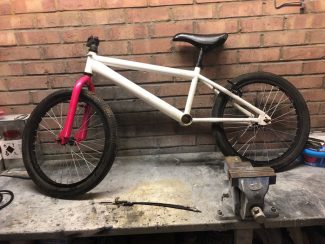 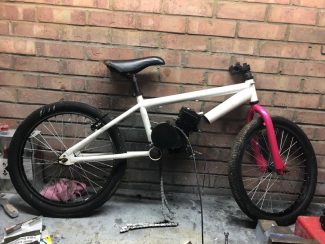 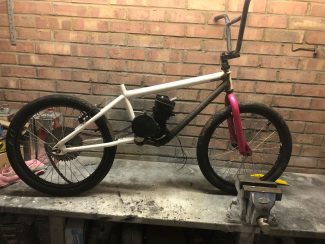 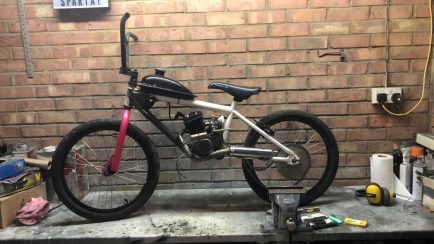 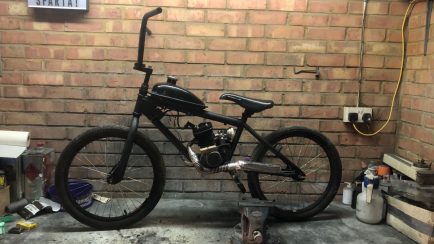 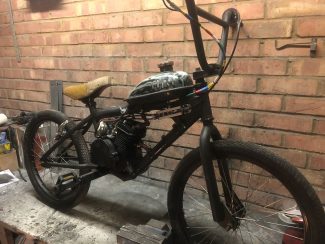 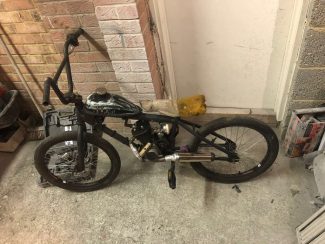 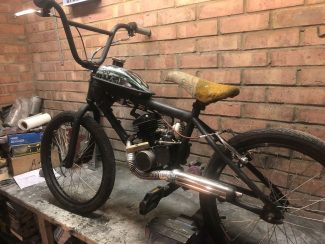 “Terribly! It’s a very short frame, so I’ve mounted the pegs way back but it’s still short. That said it’s fairly stable at 25mph and it doesn’t wobble around too much. It’s just very alien being on a bike that small, that’s propelled. You’re on a BMX but your feet are next to each other, which is really unusual.”

– What’s the best setting for it to be ridden in? Probably not a skatepark!

“No, not a park. I reckon a BMX track. The engine hasn’t got much bottom end to pull away quickly, so street or park would be pretty useless. It needs to flow.”

– How about the weight?

“I need to finish my car. I’d like to build a flat track motorbike for the road. Stick a big V-twin in it.

I also might get a Chinese 160cc engine and get Hacker Bike Co to build me a frame, so it’s a bit less compromised but still looks like a BMX. With an even bigger engine, centrifugal clutch, 16 horsepower…”

“Yeah it could be a bit aggressive, but I reckon it would be alright. You can only die once.”

– Anything else to add?

“Thanks to whoever left the moped at the end of the green lane, and cheers to Ride UK for putting it on the site.”

– Out of interest, what has it all cost you? 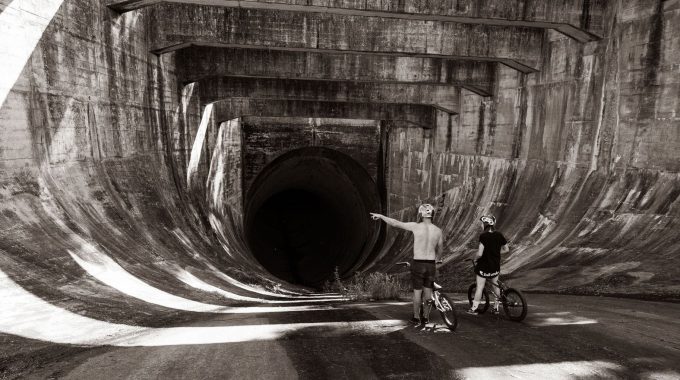 We joined Bas Keep and the crew as they dived down into an incredible drainage ditch / full pipe spot... The Whale's Stomach.