Well, not far away anyway. Things are kicking off here in the City of London. There are plenty of angry people around, most of whom seem to have decided on the Bank of England as their protest spot.

Me and Ride Ad Manager Ian Gunner took a walk over there at lunchtime as it’s only a couple of minutes from the office. I climbed up a building and filmed some of the action. Pretty nuts eh?

We also ran into contributor Chris Hill Scott who was also on the prowl for some interesting photos. Here is one of his, check out his website here for more – http://www.quis.cc/ 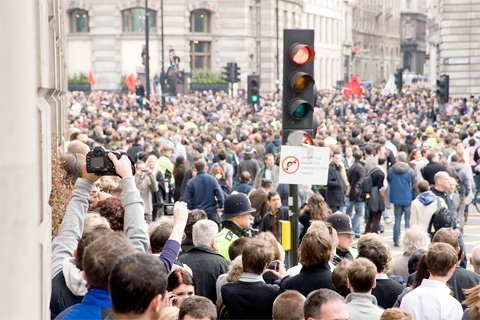 The latest Twitter update I got was that RBS has been broken into and the rioters are stealing computers and files. I think that’s called Karma, RBS…

This is a new feature we’re doing with a few specially selected members of the Ride front cover club. To kick it off, Fit Bike...

Project5/DUB Jam this weekend! But where?!

Just got this through from H-Man over at Streetphire! ‘Its the first P5 Jam of 2009 and its kicking off in Newcastle this bank holiday weekend...

Project5/DUB Jam this weekend! But where?!

Bomber and his vessel Bomber, Torquay’s streetest street rider messaged me yesterday to big up the weather down there and to let us know he’s currently...

No, literallly! The Nike store in Liverpool have a giant wall size photo of Nike and Mirraco rider Harry Main! How bigtime is that? I would...

The Making of Stay Fit - Episode 20

This latest episode in the series features long time team rider Justin Inman. He talks about cold winters in Oregon, the rad park at Burnside...

The Making of Stay Fit - Episode 20