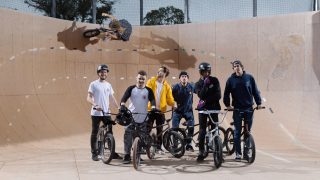 Unicorn is a clothing/accessories brand born less than a year ago. Its creator is none other than VodK, a french YouTuber in love with video games and BMX. Two of the various themes he gets into on his channel. Note that a few days before leaving on this trip, Valentin (aka VodK) had just unveiled his own park, at home in Angers. A private spot mixing transition, funbox etc. that will certainly be featured in a new video.

Anyway, on April 25 we all met at Paris airport, and our destination was the US for 10 days to shoot video/photo for the launch of the next Unicorn collection. Unicorn in California!

The first Unicorn trip took place in Annecy (France) late summer 2017. Let’s say it was still the premises and the early stages of the brand and team. This time it was important to mark the occasion so California was a destination of choice for the second Unicorn trip. When we start thinking about California and all the spots it has to offer, we can’t dream about anything better.

The goal was not to find some unique or unseen set ups, but more to see the legendary places from our eyes, the ones we only caught glimpses of on video. A little history lesson which was far from being a waste of time, especially when some of the team members had never been to the US.

Justin Fouque, still as committed as ever, he makes a strong impression with amplitude and speed. Alex Bibollet is constantly on the road, he just spent 6 months in North and Central America. Maxime Berton rides with an incredible flow on transition, on concrete or dirt jumps. Thomas Benedetti with his very versatile riding is able to ride all sorts of set ups. Chris Haas & Nils Cianci are super fun young park riders and big rap fans. A 100% French crew, good at all kinds of riding and a great group of friends too. There we all were, on a 10 day trip from Woodward West to Los Angeles down to San Diego. 2 full cars on endless straight roads and a big motivation to enjoy everything California has to offer.

Our days were spent with a nice pace of a morning warm up in a park/bowl and then in the afternoon we would search for a more ‘mythical’ spot. And of course, every 4 hours, we had to stop in every possible fast food place in America. An extremely complicated choice as you can imagine.

Thanks to the contacts we already had and others met over there, we got the chance to ride incredible spots. Here is the list of spots in the order we visited them:

To wrap this up, I wish all the best to this tight and motivated crew of friends which promises a lot of good things to come in the future! It is a very nice thing that a brand originates such popularity as it makes possible to send its whole team in California (possibly a first in France).

We will certainly hear more about the Unicorn family very soon and their next destination.

Valentin, Jake Leiva, Zach James, Erwan Perelman, Anthony Napolitan & the Wetlands locals, The Casey Family and everyone who helped and made this trip unforgettable.