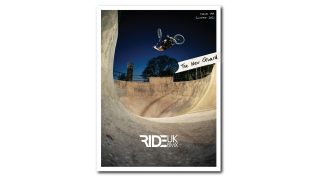 Ride UK BMX Issue 199 has arrived.  We’re proud of what we’ve done here.  Yes, it was a long old break between issue 198 and issue 199, but that’s even more reason to celebrate the now!

Now issue 199 has well and truly landed and we’ve enjoyed seeing the stoke from everyone on our social media notifications since the launch.  For those who haven’t grabbed a copy yet, this article is for you.  Let’s go through what’s in it, who’s in it, and where to get it.

On the cover: A new line in one of the oldest and gnarliest bowls in the UK.  Dom Elt folding one over the channel in Satan’s Toilet, Southsea. Photo: Martin Grainger 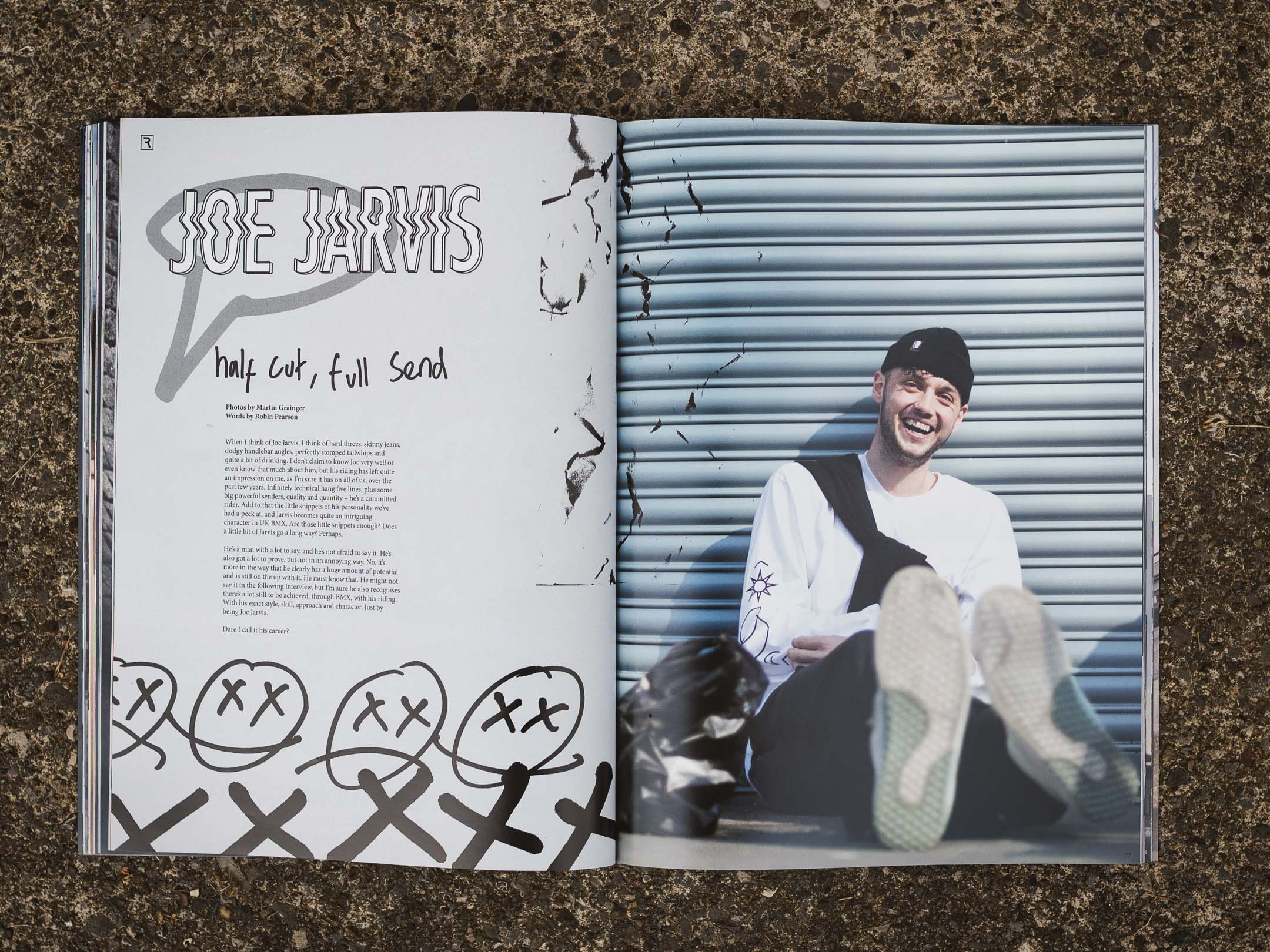 When I think of Joe Jarvis, I think of hard threes, skinny jeans, dodgy handlebar angles, perfectly stomped tailwhips and quite a bit of drinking.  He is a man with a lot to say, and he’s not afraid to say it.  Joe sets us right in this fiery interview. 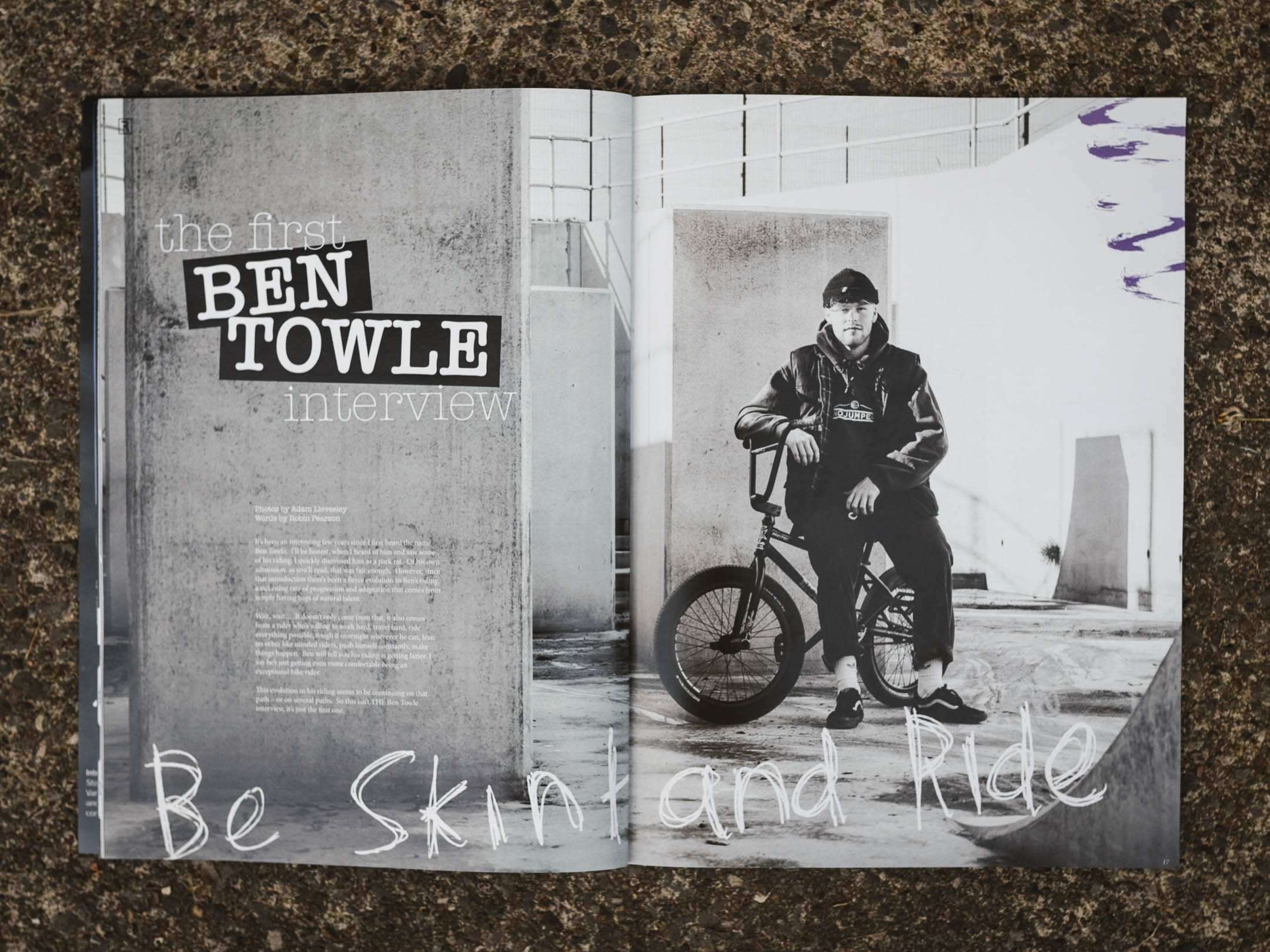 It’s been an interesting few years since I first heard the name Ben Towle.  I’ll be honest, when I heard of him and saw some of his riding, I quickly dismissed him as a park rat.  Of his own admission, as you’ll read, that was fair enough.  However, since that introduction there’s been a fierce evolution in Ben’s riding, a sickening rate of progression and adaptation that comes from simply having bags of natural talent.  With Ben on this path, we wouldn’t call it THE Ben Towle interview, so it’s just the first one. 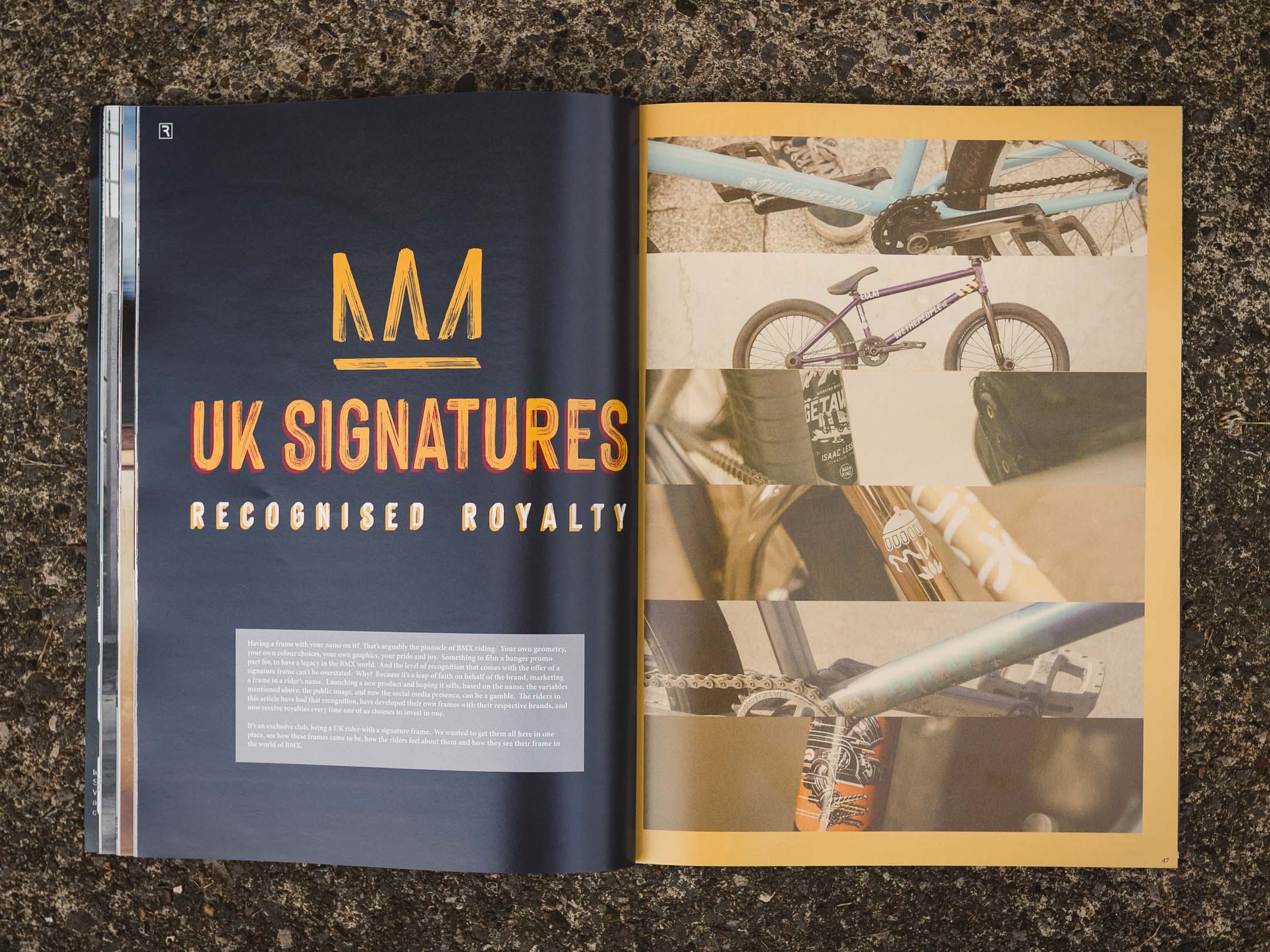 Having a frame with your name on it?  That’s arguably the pinnacle of BMX riding.  Your own geometry, your own colour choices, your own graphics, your pride and joy.  With all UK heavies: Jordan Godwin, Isaac Lesser, Alex Donnachie, Kieran Reilly, Alex Coleborn, Dan Paley, Dan Lacey, Tom Justice, Mark Webb, Kriss Kyle & Alex Kennedy, this is the elite club of homegrown riders with sig frames. 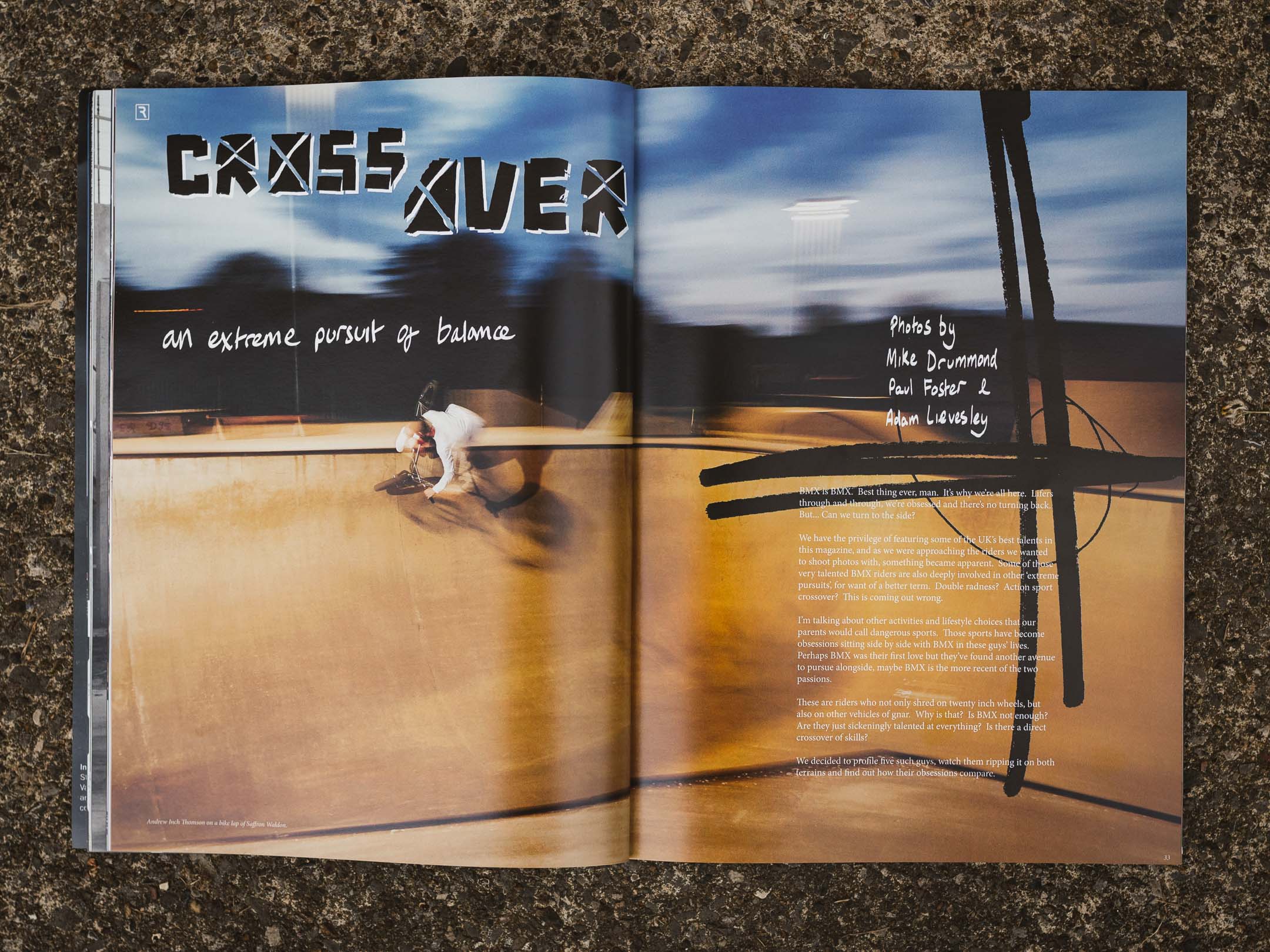 CROSSOVER – An extreme pursuit of balance

Looking sideways with five rippers.  These are riders who not only shred on twenty inch wheels, but also on other vehicles of gnar.  Why is that?  Is BMX not enough?  Are they just sickeningly talented at everything?  Is there a direct crossover of skills?  We decided to profile five such guys, watch them ripping it on both terrains and find out how their obsessions compare. 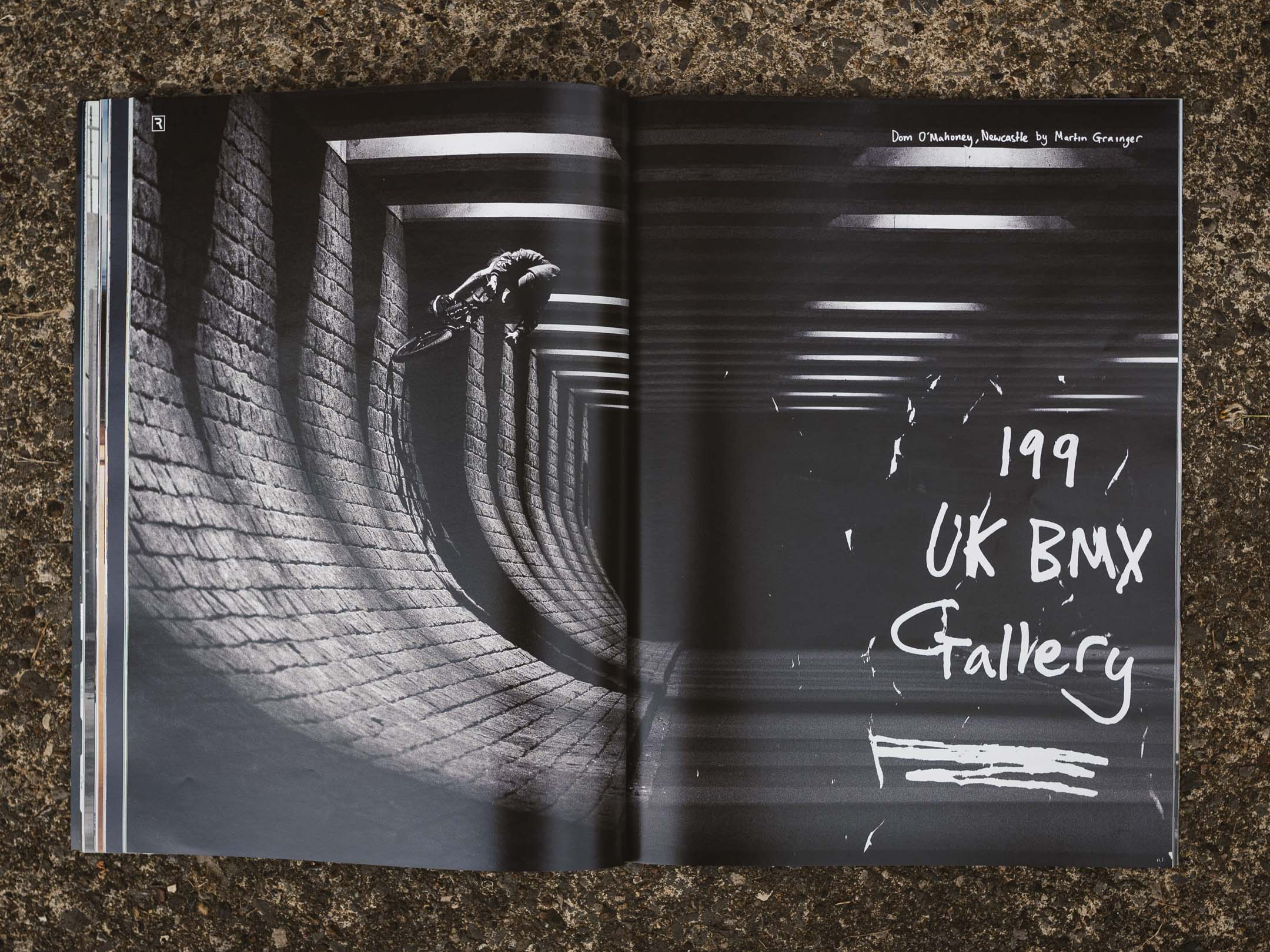 Not eight random photos with no home, eight carefully chosen banger images that we wanted to showcase with no distractions.  Street, park, trails – UK BMX up and down the land. 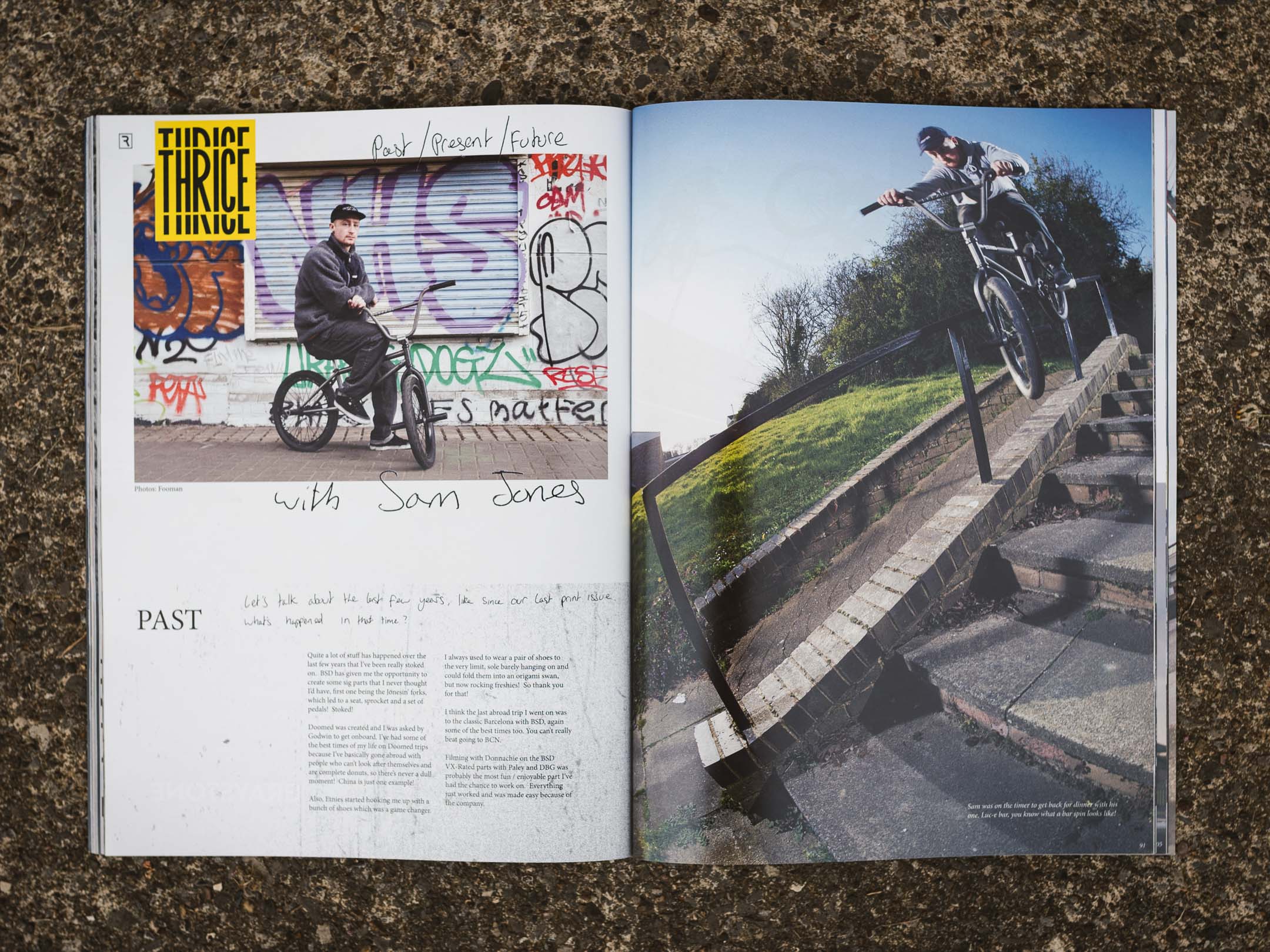 Past, Present & Future thoughts with the one and only Sam Jones. 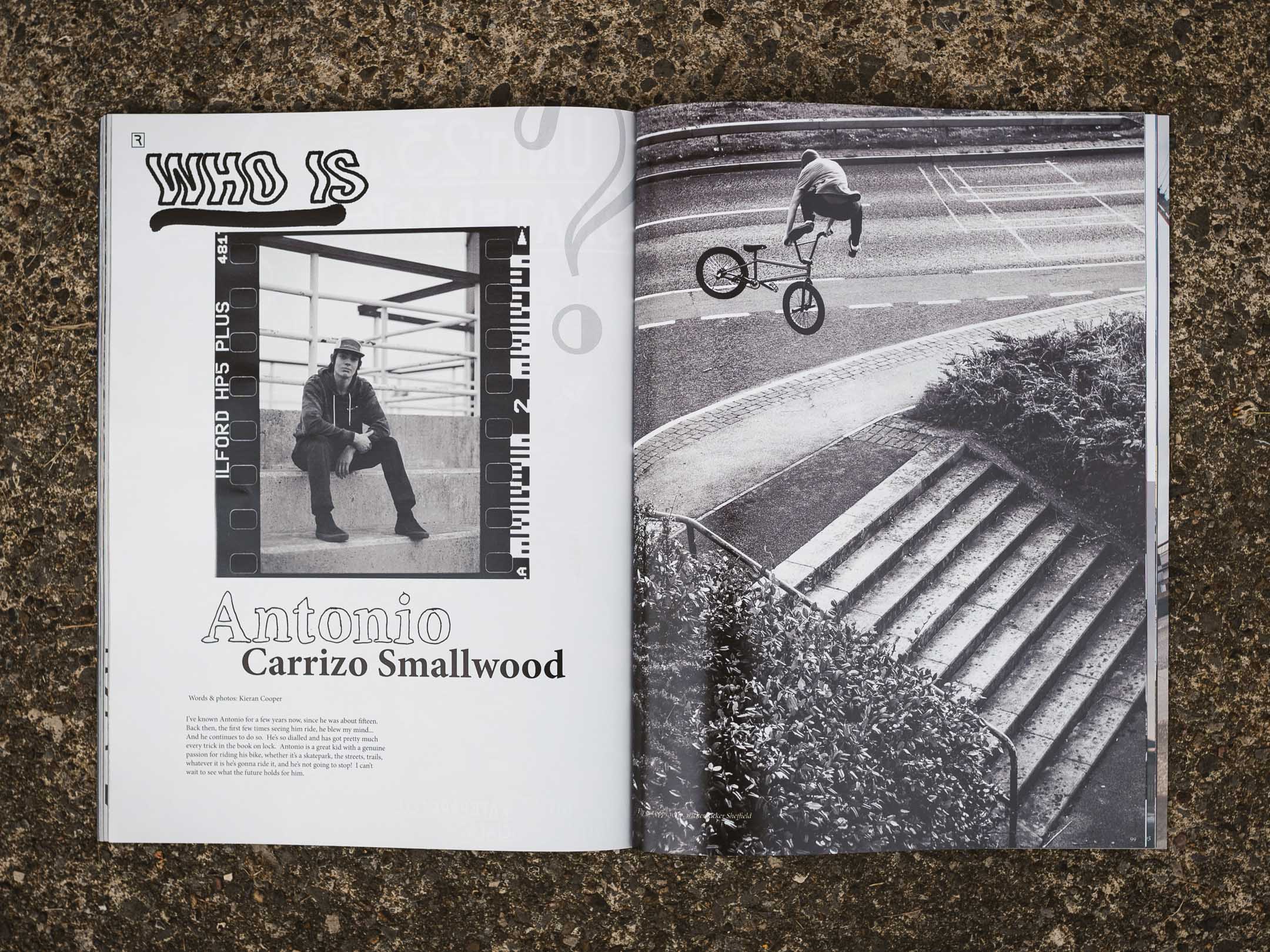 Getting to know this young Hull talent. 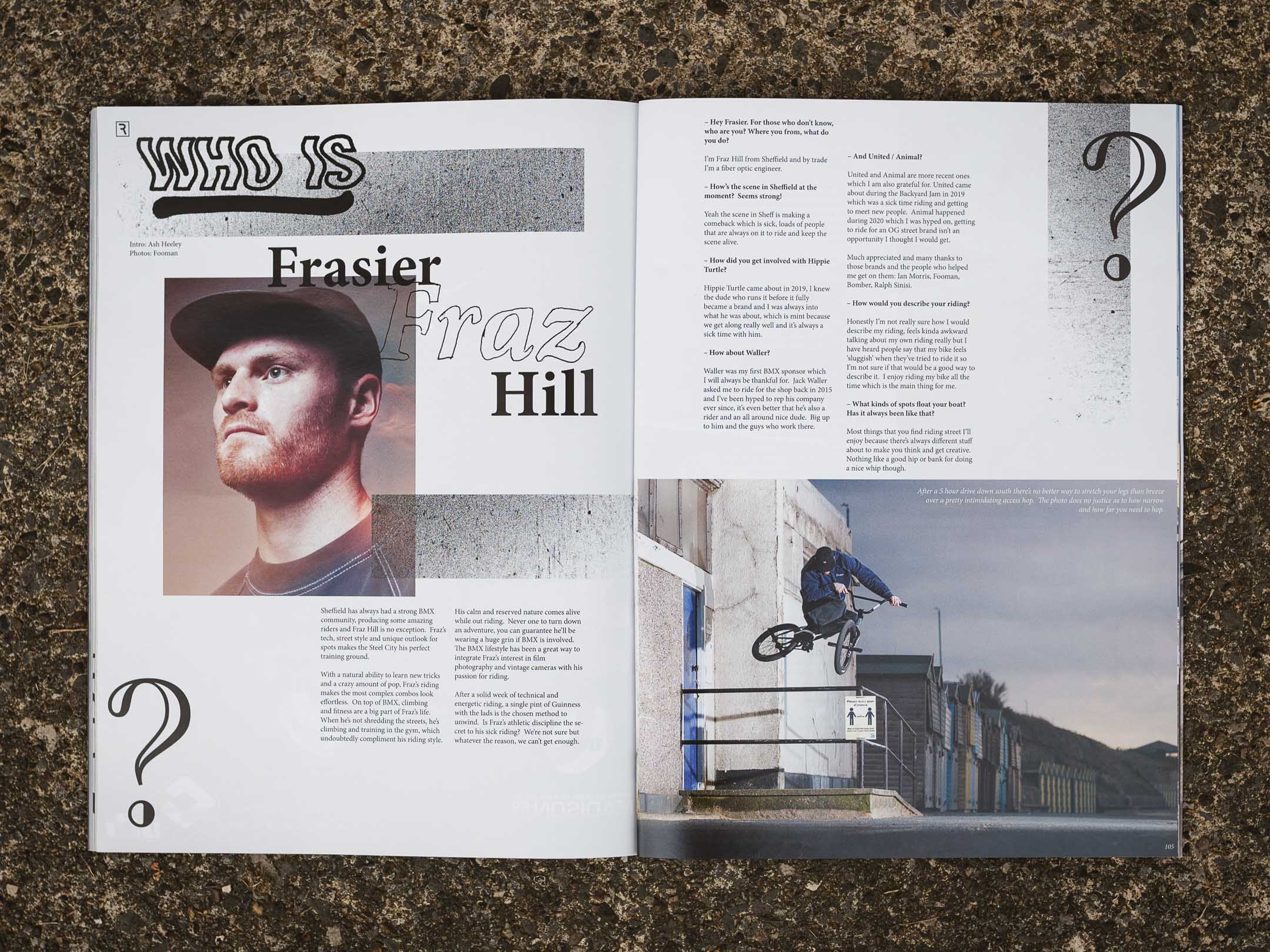 WHO IS? Frasier Hill 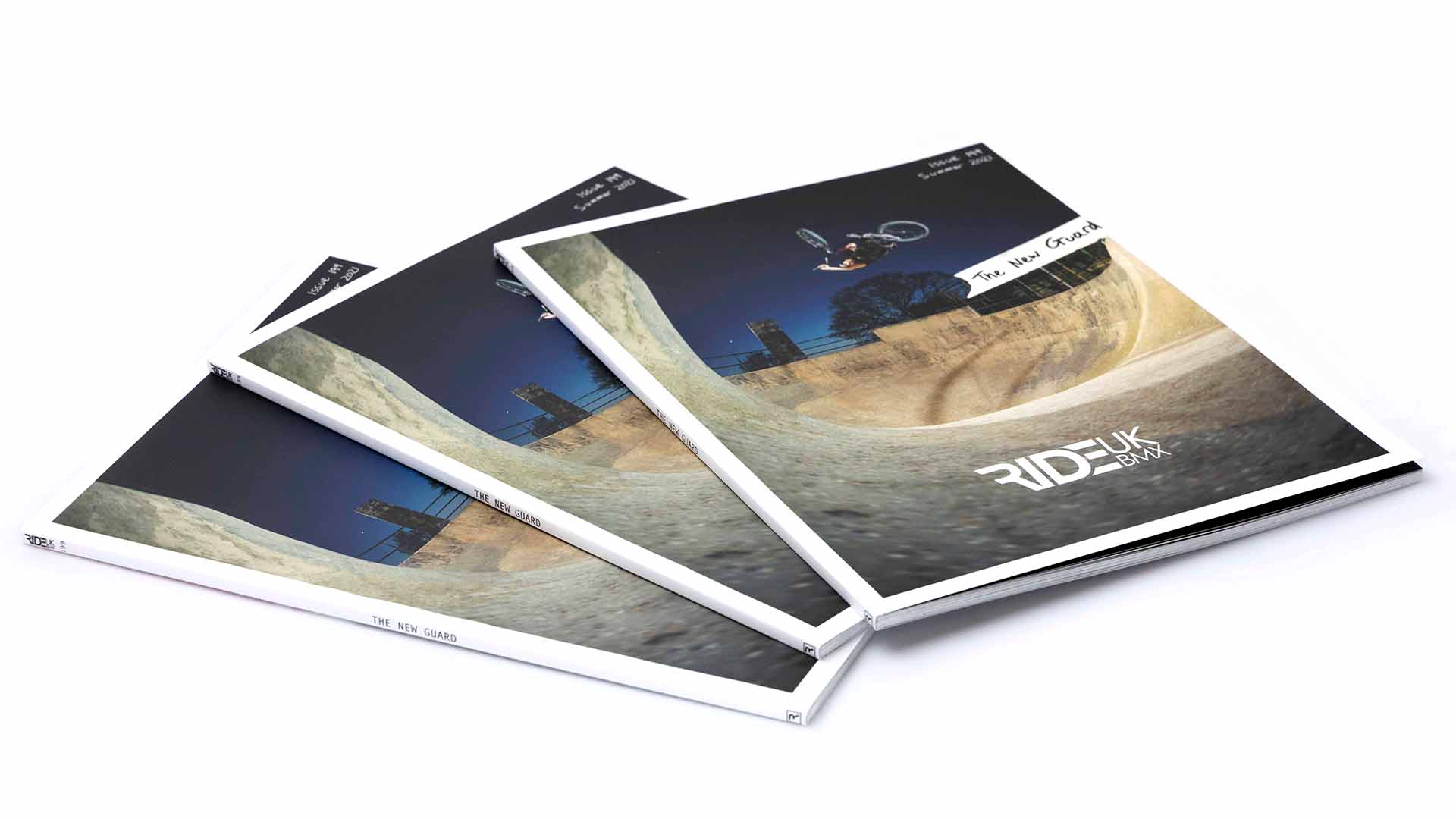 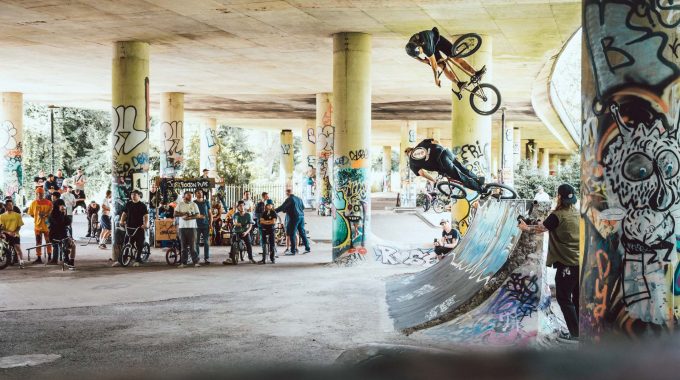 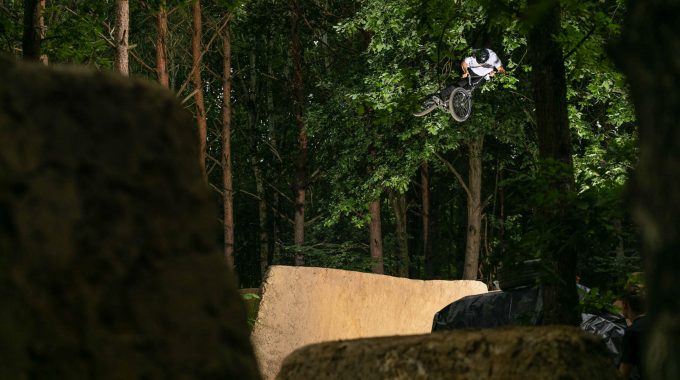 Video and photos / Trails and RAIN 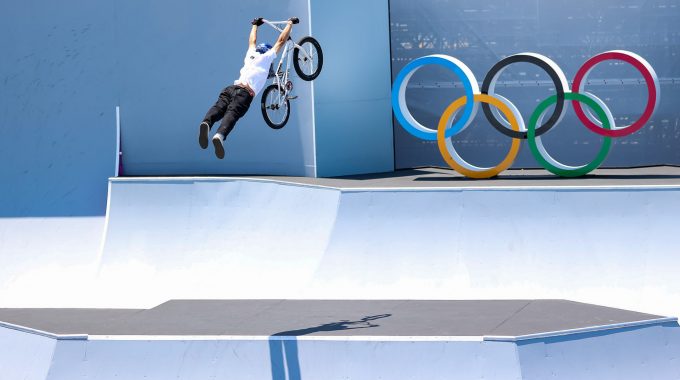 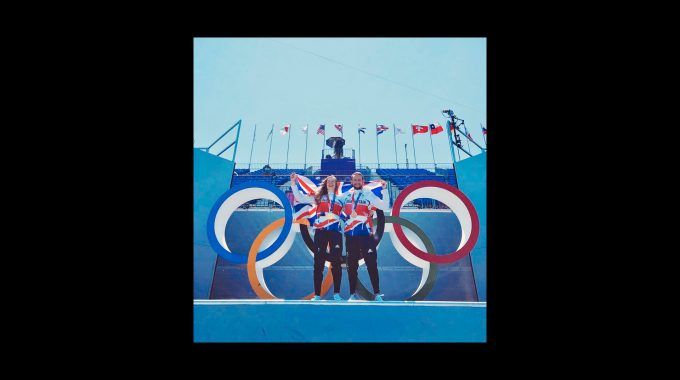