What exactly is the greatest BMX game ever made anyway? I think it all started on the Spectrum ZX with some race simulator. You’ll have to excuse my ignorance because I never played it but I’m guessing it was rubbish. The first real BMX game I ever played was the BMX portion of California Games. I’m not just being nostalgic when I declare that game mint! A race track featuring bad ass jumps that you could 360 and even flip all culminating in you doing a massive fly out over a motorbike. It didn’t get much better than that. Does Paperboy count as a BMX game? He was certainly on a BMX, could pop a wheelie and jump a ramp but throwing newspapers at lawnmowers? 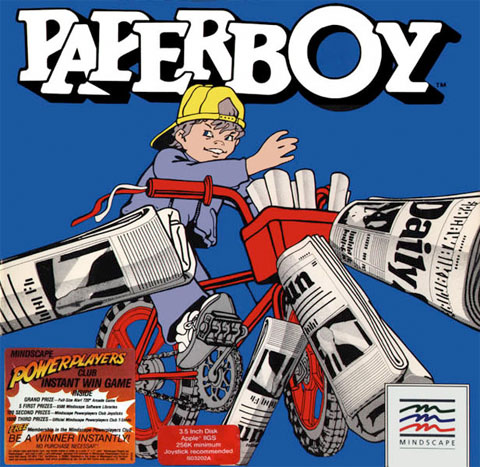 Then there seems to be a definite lack of games until Courier Crisis rears its ugly head. Far from a proper BMX game it was more a GT marketing tool. Lets look at the evidence, the no footer was called a Spread Eagle. The motion capture looks like it was done by no way Hans Rey and I dare say probably was. Work through some missions and get some cash so you could ride a GT Speed Series. I doubt riding the GT Speed Series of the lumberjack would actually make you any better at delivering parcels and jumping off wooden kickers in the street. It never made him any good at riding trails that’s for sure. It was crap. However it didn’t stop me playing it quite a bit just because I could do some tricks and jump off some kickers on a BMX. 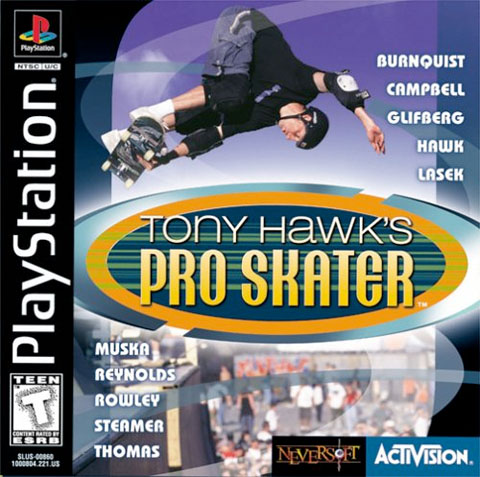 Tony Hawks Pro Skater isn’t a BMX game but it is a mile stone in the genre. You could do tricks and just shred about a level, styling bro. BMXers go on about style a lot. Style in computer games is also an important factor that people often overlook. Button bashers are the bitch cranking brake squealing Indian giving goof riders of BMX! Why is that skaters always have it better and we are left with the scraps? How come there are no BMXers getting a cameo on entourage? Tony Hawk was mint! When the sequel dropped with the all important gap list and mannies, I was in heaven. Probably more of a money thing than an actual love for BMX they dropped Mat Hoffman’s Pro BMX. A cookie cutter cut and paste clone of T Hawks. Hurrah! A BMX game that will potentially be as good as Tony Hawks? No such luck, the game was a sham. The controls were crap and the game engine didn’t correlate with BMX at all. 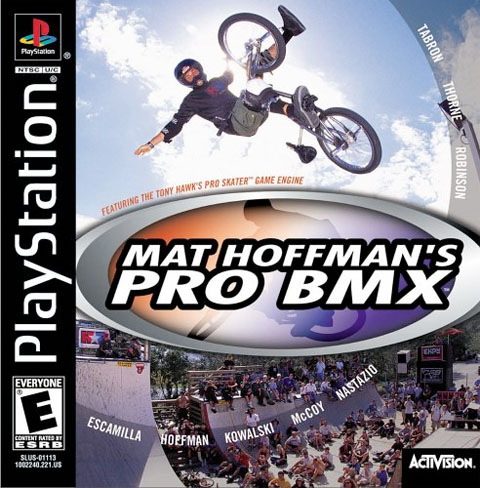 Luckily though, Dave Mirra was there to save  the day. His game was actually built from the ground up with a bit of thought and attention to the control system. Woodward Camp was always the best level. You could do every trick that was in your head and then some. The way you could chuck a barspin in or take a limb off during any trick was a right touch. Granted the Backflip bunnyhop is a bit 3003 and you couldn’t do whops. The whop should have been a dragon punch style button sequence. I even heard Dave Mirra used it as a training aid and puts it down to this game that he supermanned the channel to manual on the Woodward Vert ramp. All these modern day ramp heroes must be on it all day as well; flair to tyretap to footjam whip. Where do you think the ideas for that nonsense comes from? The Maximum Remix edition even had the added bonus of the wallride! The sessions on the game were epic. 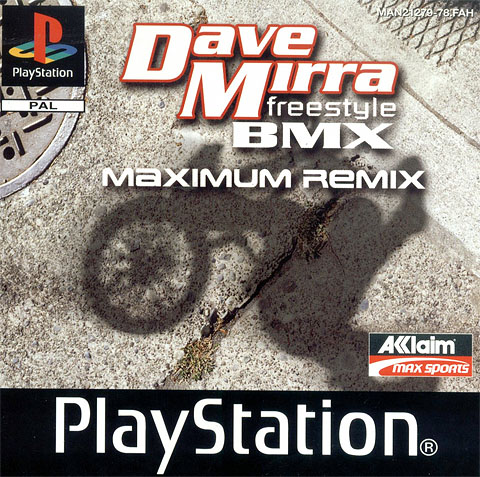 I have forgot to mention TJ Lavins game, Sorry TJ but I’m tryin’ to forget it. What were you thinking putting your name on the box? Royalty cheque probably. Sometimes bad computer games are so bad they are good. TJ Lavin’s potentially had this factor, just trying to ride a six pack was such a challenge and Beringer was in it. All of the dog shit challenges and whack levels killed it though. Here it is what we’ve all been waiting for, the best BMX game ever made, Dave Mirra Freestyle BMX 2! 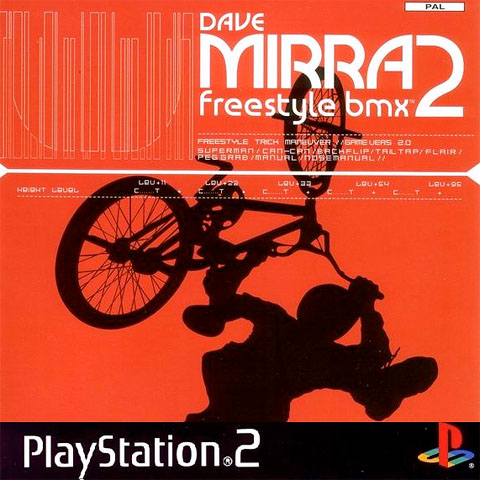 The powers that be obviously thought BMX was a waste of time and shoved the third BMX game in Tony Hawk American Wasteland as a side note just because they had already paid the guy to make it. A little mess about on GTA was OK for a laugh but it was never anything special. Although it was Tony Hawks was mint, Thrasher Skate and Destroy did show that a few things could have been done better and that’s exactly what happened when Skate dropped. T Hawk got blown out of the water. Button bashing was out and straight up skills was in. I’ve seen reviews of Skate saying it is too hard for the casual gamer. This is exactly what we need. Casual gamers are wankers. I remember completing Metal Gear Solids VR Missions thinking I was the boy. As a reward they show you how good the japs are at it. Blown away, I got down to some hardcore training to get some good times.

Now where are we at with the BMX game? Still playing Dave Mirra 2 while everyone else is playing Skate 2 on an Xbox or PS3. It pains me to say it but I think Skate 2 is probably the best BMX game ever but the fact it hasn’t even got a BMX in it is somewhat of an issue. 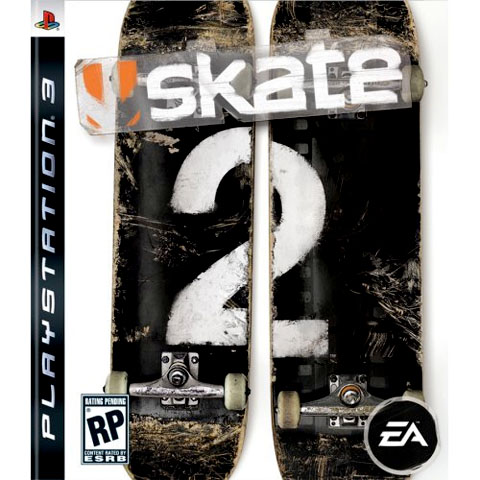 The greatest BMX game ever to be made will be, BIKE. Or should it be called RIDE? It hasn’t been made yet but EA Games are sure to pick up this article and get on it. Once that’s happened I’ll be living off a royalty cheque for the rest of my days. So its going to be slightly Dave Mirra 2 and slightly Skate 2 mixed up in a pot. The level is going to be one massive GTA/SKATE style city with a ton of real spots in it. The invented levels on these games are always slightly disappointing. You play as a gadgy trying to come up just like Skate. There are no challenges which involve scoring points as these have always annoyed me. The one major twist in this game is that it isn’t just riding a BMX bike, you can get a downhill bike, a fixie, a racer and the unicycle, tandem and recumberent are going to be an unlockable options once you’ve completed it. Taj, Vic Murphy, Chase Gouin and the Gonz are going to be in it dishing out the challenges as is Chris Hoy. Chris will deliver the velodrome challenges where you will be riding a fixed gear. Some kind of perpetual circular motion on the analogue stick is how its going to work while on a fixie. A few courier missions here and there from Joey Joe, Poppa Smurf, Kinyarda and that Greek fella who was in the chippendales. As everyone is saying there is no money in BMX the fixie riding and downhill elements will get the punters buying it, insuring good sales figures. Plenty of bike brands will hand of the cash for some sponsorship and licensing. We can even stick John Cardiel cameo in as well for good measure. A Tom Simpson drug fuelled ventoux Tour de France stage. Its going to be great. You’ll be able to ride whichever bike on whichever terrain. Try to BMX down the downhill track and you’ll be rubbish, try to do stunts on a fixie in the park and you’ll fold it in half. Dragon punch whoppers. Its all in my head. EA I’m waiting for the call…

So early on in January, we met up with Mirraco and Nike 6.0 rider Harry Main on a cold Saturday evening at a scrapyard on...

Every weekend we seem to have a new edit up from the Crow trails. Some might argue that it’s getting old, but for some reason...

Seventies have added a new rider to the UK Hoffman Bikes team to join Sebastian Keep and Jon Taylor. His name is Zack Williams and he’s...

So early on in January, we met up with Mirraco and Nike 6.0 rider Harry Main on a cold Saturday evening at a scrapyard on...

Every weekend we seem to have a new edit up from the Crow trails. Some might argue that it’s getting old, but for some reason...

Seventies have added a new rider to the UK Hoffman Bikes team to join Sebastian Keep and Jon Taylor. His name is Zack Williams and he’s... 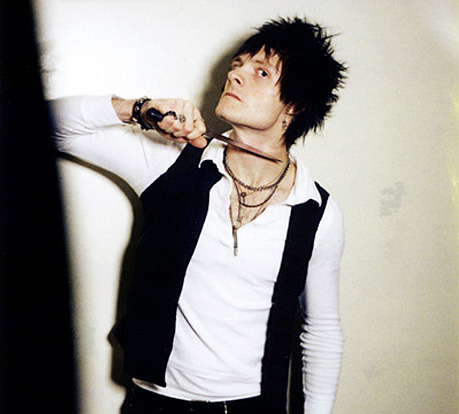 Sean Burns from Éclat Saw this linked from the Éclat website, an interview with Sean Burns for the animal friendly organization PETA. Now I can understand what...

It’s been a while since I’ve seen a GT Bicycles edit from across the pond, let alone one from the UK. Yet my inbox tonight...