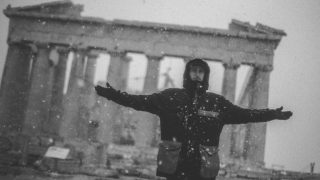 We are in Greece it can't snow!

Words and photos by Fooman

Receiving word of a potential trip is something I hope for every day, being asked to go to Tunisia was a bit of a weird one, but I’d not been there, so why not? Shortly after that, a group message was formed, always a good way to find out whom you’ll be going with. In this case it was; Pete Sawyer, Jordan Waters, Ed Zunda, Mike Curley and the land baron that is Will Evans. Conversation quickly went from actual talk of the trip to just general “have you seen this” (insert funny picture of a cat or some shit). Anyway, the idea of Tunisia sounded great; it’s going to be hot there of course. A quick Google for some spots and any BMX related stuff from Tunisia drew a blank and the idea of it being a good idea going there started to dwindle, we needed a new destination, somewhere that has a guarantee of some architectural structure to which we can play kids bikes on and create some content. Athens was quick to pop up in the chat; we had all seen evidence of spots out there so it made sense to chase the sun that way. That was it; Athens was the agreed destination for the crew. Straightforward. Nice, just the way it should be. Organising a pissing date to go and return on though was another story. Valentines day and a loved up Mike Curley led to some confusion and re-arrangements that led me to realise why the term “its like banging your head against a brick wall” exists. Ok, lets just leave it at that. Wethepeople were going to Athens.

The journey to the airport kind of hinted to how this trip was going to be, I mean I pick Pete up from a train station off the M4 and he arrives with his bike still packed and an empty bike bag in trail…“Pete why haven’t you packed your bike away?” “Oh, I got drunk last night and got some clothes in my bag this morning, its fine, I’ll sort it in the car park at the airport.” At the Airport, already pushing the gate closure time, Pete’s finally packed his bag, we get on the shuttle bus and I look over to where my car is and notice that Pete hasn’t actually packed everything. A tip for anyone who is travelling, turning up late is actually quite a good thing. You avoid the queues and waiting around, literally turn up drop your bags off to the lovely check-in attendant, chat shit to her until she tells you that you need to go get the plane and that’s it, job done. It’s like speedy boarding but free and you’re on the plane for less time, why people actually pay for speedy boarding is beyond me.
We arrived to Athens international, collect our bags and both turn to each other at the same time “where are we meant to be going and how do we get there”? Classic. As we leave the airport we are greeted by a stranger… this stranger turns out to be George…

We saw a car flipped over and on fire, people huddled round it to keep warm

George as we learn throughout the week likes to have a good time and get loose! He also introduced us to the Greek national bbq/meat day, which gets loose as shit; we will come back to that…
We get shown to the car and meet Konstantinos Load our shit in and hit the road! It’s dark when we drive from the airport to the apartment, all I can really make out are the mountain tops standing proud, I keep expecting to see the Acropolis in all its glory but that was a no show. We start to make our way into the city, the buildings begin to grow in numbers and climb in height. I can’t help notice the amount of graffiti that was plastered about, almost every building, no bare wall below the 8ft mark. A colour splash everywhere, from giant pieces to little tags you name it and it was there. George tells us later into the trip when it’s mentioned that you don’t tend to get stopped by the police for graffiti and tells us about a friend who tagged a train getting stopped by security then the security guard just starts tagging up with him. Come to think of it, I don’t think we got stopped by the police at all, we had some crazy religious guy shout at us and I was told off for having my feet up on the seat whilst on the tube but other than that no dramas.

If you followed the WTP Athens tag on Instagram, I’m sure you will have noticed the weather we experienced. When I think of Greece, the picture that pops up in my head is that of blue skies, blazing sun with its heat that sends you to the shade. Well, the first day was very much that, not sweltering but a great deal warmer than England that’s for sure. George tells us that the news is saying they are expecting snow to fall in Athens, surely not? George goes on to say it hasn’t snowed in Greece for four years or so, I was hoping the weather team had just got it terribly wrong. We are in Greece, it can’t snow! It did, and was quite persistent, stopping us in our tracks, everything was soaked, and it was freezing, no bike action for a few days. Tourist and party mode took over, the crew just as happy to explore Greece via the metro as they we’re on the bikes. Another thing I didn’t understand; the metro, you could just walk on and off as you please, no payment, nothing. No one seemed to pay or even attempt to, bit backwards, but ok, go with it. We visited the Acropolis as everyone was itching to go up there. We braved the snow and made our way to the top, the Acropolis is fully covered in scaffolding, not like the picture in the brochure. A blizzard set in, everyone was freezing their tits off we headed back to the apartment for some drinks and pray for the good weather to roll in.
We managed to have a break in the weather, the temperature still on the low but the floor was finally dry. We pencilled in a visit to the Olympic stadiums, these were real cool, each having a decent set up to session and lots of buildings to enter and explore. Myself and Pete went inside to what appeared to be a fair few squatters “Home” with clothes hung up everywhere and random shit scattered all across the floor, not to mention the actual human shit on the floor. It was actually so shit to see that people were living like this,we did make friends with a dog, which followed me, Pete and Jordan around for absolutely ages. We saw a car flipped over and on fire, people huddled round it to keep warm, like the shit you see on the news it wasn’t good. 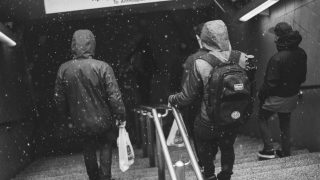 Thursday was a belter, we met with Aris and he showed us about some of the local spots and took us to the other Olympic stadium. I think it was the most productive day of the trip, everyone managed to get something done, media guys happy with the haul. The real treat came in the evening, we went to meet George and his friends for what I believe (after having a Google search) “Thursday of the smoke of grilled meat” it was amazing. We basically went into this restaurant and greeted everyone before we sat down to some beers then all of a sudden plates, upon plates, upon plates stacked with grilled meat comes hurtling our way, we also had grilled halloumi, tzatziki, some spicy cheeses, it was an amazing feast, I didn’t think it was ever going to stop, beer after beer, plate after plate, all just proper stacked – HEAVEN! George got us drinking a spirit, I have no idea what it was but everyone seemed to be enjoying it, I can tell you that much. It got loose as shit! The Greek know how to party 100%.
The next day was upon us, a very fragile and hazy crew, the weather not in our favour again but looking to dry up. We ended the day/trip with a shop signing/meet and greet at Pedals bike shop. We drove for what seemed quite a while, kind of at the outskirts of the city. The turnout was dope; so cool to see so many people turn up and show that the scene is alive there. After the crew had signed and had the photos taken, it was off for food then back to the apartment to pack our stuff for the flights back home.

I found Greece to be a bit of a weird one in all honesty, the surface has merely been scratched regarding spots to ride. I think if you had a van to explore more of the outskirts of the city, you would find some absolute gems hidden away. It’s a cool place none the less, even through the economical struggle at present, plenty of things to see and do, the hospitality is second to none as well, we crossed paths with some right characters and had a blast, even if it was actually colder than England.

A big thanks to George for taking us under his wing for the week and showing us how to get down Greek style. A thank you to Konstantinos, Aris, Panos and Jason for hanging out and showing us some spots. Also a thank you to Pedals shop and the locals that showed up.