Bristol has always been known to have a good flow of riders passing through and Tom Hill (aka Dom) is one of the few people that has remained a constant presence.

Dom’s been a solid fixture of the Bristol scene forever, and first graced the pages of Ride UK in 2007 in the feature ‘BS3 GCSE’. Here we are ten years later.

Despite being a regular on the streets this is one of his first full solo edits. We caught up with Dom about BS3, influences, this new video and how it all came to be.

– Firstly… To avoid any confusion, what are people meant to call you? What’s with the Tom Dom Hill thing?!

“This one goes way back when I was 14 or so and had a paper round for an Indian family. The shorter version is that the main guy there couldn’t pronounce his Ts very well so ended up calling me Dom. I guess it just had a domino effect from there and now ‘Dom’ is what everybody knows me by. Call me Dom.”

– What is it about BS3 that has kept you lurking the wrong side of the river for so long?

“Man, where do I start? BS3 is the place to be in Bristol. What’s more, it houses all of my needs in one small kind of eco system. BS3 is where I work, it houses my favourite football team, is home to the Deaner and is only a short pedal to the centre to name a few things. I busted my first nut in BS3, it’s a place I hold close to my heart. Don’t get me wrong though, I’m not some sort of postcode warrior, it’s just a decent place to call home.”

– How has the Bristol scene changed in the last ten years – have there been any notable riders that have passed through and made an impact on your riding?

“A lot has changed over the last decade, ten years ago are what I like to call the glory days. I’d just finished school and started college, gotten quite good at boozing and birds and BMX too. Although I don’t always like to admit it, I was heavily influenced by a sharp tongued, ginger haired lad from Plymouth called Rhys Coren. Rhys ensured that Vans were on my feet, Levis on my hips, pegs on my bike and my hands were as far from the bars as possible when doing a sling.

“Seeing people progress and get outside recognition always pushes me to ride and better myself.”

I couldn’t do this interview however without mentioning my homie Levi Rogers. Man, seriously, he was the best bike rider I have ever seen and taught me everything I know. Levi doesn’t ride any more but his name lives on in legendary status in Bristol.

Nowadays you’ve got a savage scene. Crucial BMX Shop is like a rider factory, pumping out the next biggest thing every time I look up from my iPhone screen. You’ve got all the Kingswood lads who deserve a shout out and now Emerson Morgan has moved to Bristol, bringing with him his army of Yate Tape lads.

The scene is strong, and growing too. Seeing people progress and get outside recognition from their inner circle always pushes me to ride and better myself.”

– How come it’s taken so long to get something out there? How did you find the process of putting it together?

“I wouldn’t say this is my first full edit, but it’s definitely the first one I’ve really taken seriously I guess. I tend to end up doing bits and bobs for lots of little mix tape projects etc. I’m also my own worst critic and a lot of what I film just gets chucked.

Putting this project together hasn’t always been easy. Joe Williams who filmed it lives in Exeter, so already we have a logistical problem, couple that with British weather, injuries, security and all the usual things it’s been a tough one. Joe is the best person to film with though and doesn’t mind sitting there for hours while I try something over and over again. I’ve also never known Joe to mess up a bar pic either, which is rare.”

– Have there been any particular videos or sections that have helped inspire you along the way?

“There are too many videos to mention, but recently I’ve had few on repeat. Antidote, All City and Withenshawe Waltz have been my go to videos before riding. Anything independent and UK gets me buzzing.

“There are too many videos to mention, but anything independent and UK gets me buzzing.”

I also draw lots of inspiration from music, a few of my favourite artists dropped new albums at the start of the year, so having their music in my ears helps me get pumped, including the track in the video.”

– Have you got any more projects/trips lined up for the winter?

“My main plans for winter are to ensure I keep riding throughout, sometimes it can get difficult. Me and my friend Raivis have got a winter project in the works and that gives us a good reason to go and ride street when it’s dark and there’s talk of a trip to Spain in February too, so watch this space I guess!”

– Lastly, for anyone who happens to be passing through BS3 in the foreseeable future, have you got any good recommendations for how one could pass their time?

“Bristol has so much to offer, but if you’re in the BS3 area specifically, then for one pop in to Crucial BMX and say hello. Crucial, like the scene, has ballooned in size over the years and does a great deal behind closed doors to help BMX in Bristol. Also get yourself down The Apple with me for some rough cider and once you’re done there, stumble past Papa Grill for a falafel wrap. Also, what would a trip to Bristol be without visiting Dean Lane skatepark, the mistress. My training ground.” 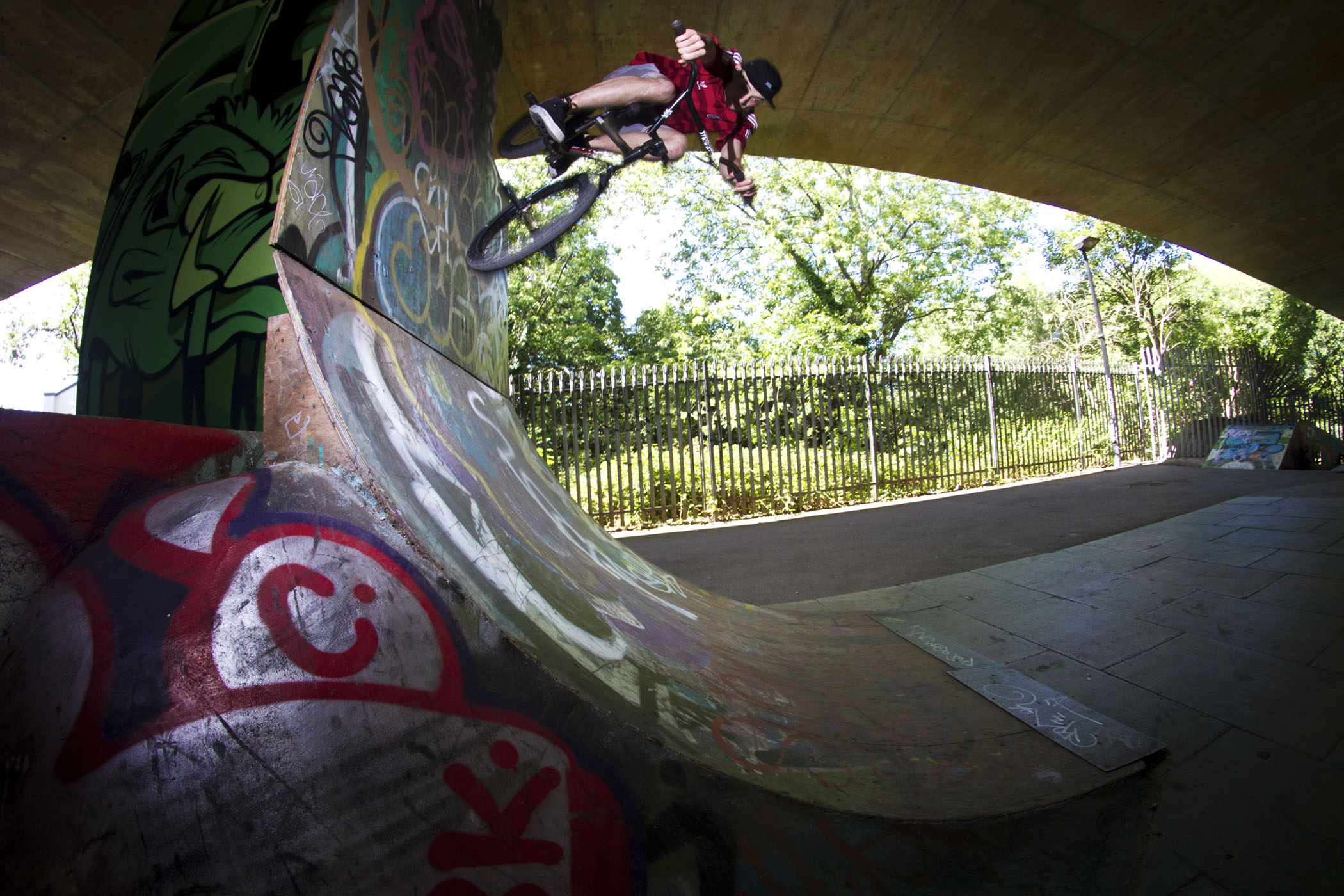 “Thanks to Ride UK for this article and thanks to Joe Williams to filming and putting up with me.” 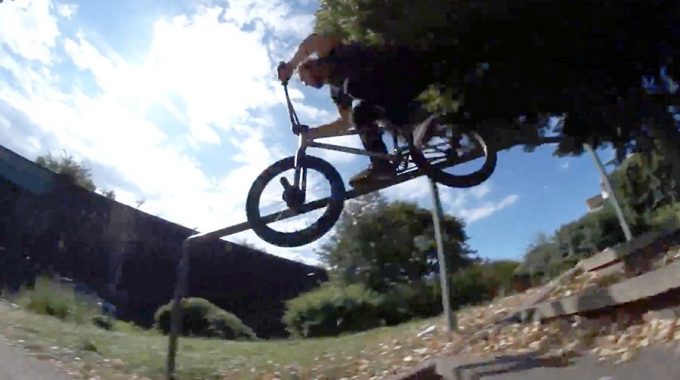 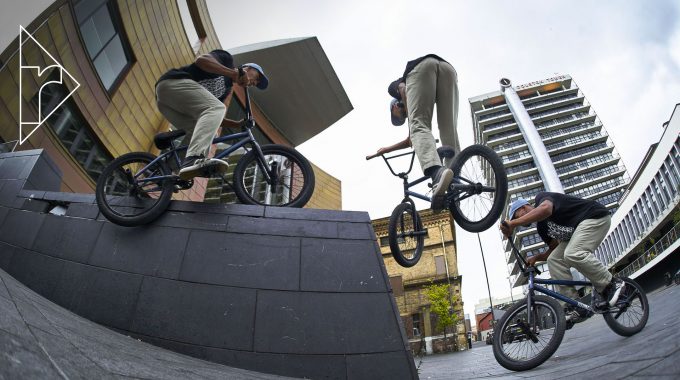 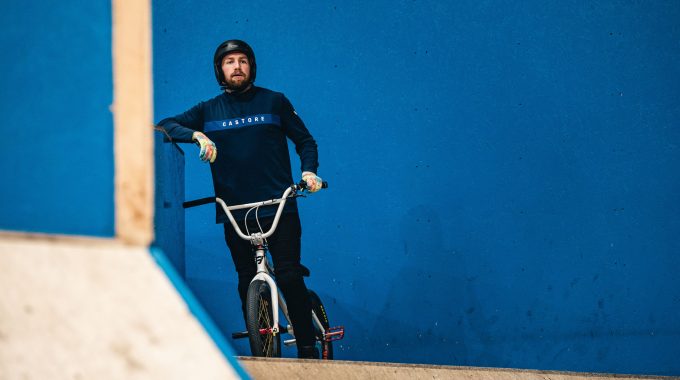 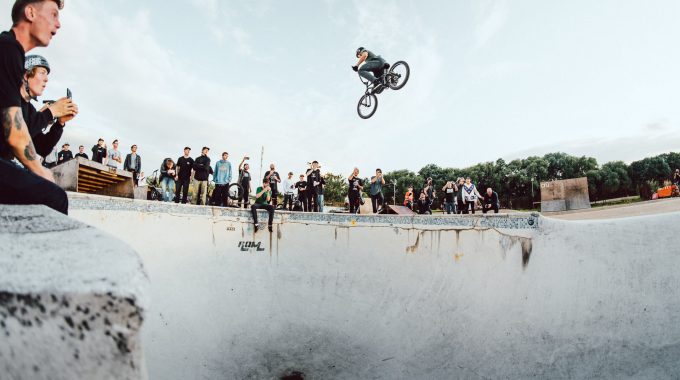